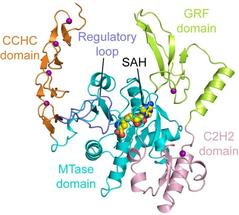 This image shows the structure of ZCCHC4.

RNA, or ribonucleic acid, is present in the cells of all living beings and required to synthesize proteins. A research team at the University of California, Riverside, has discovered the structure of a novel RNA-modifying enzyme, ZCCHC4, and identified the mechanism that controls how this enzyme recognizes itssubstrate.

ZCCHC4 influences cell proliferation and has been linked to cancers. It uniquely introduces one kind of RNA modification, N6-methyladenosine (m6A), into ribosomes, which are cell organelles made up of RNA molecules and protein.

The study, published in Nature Communications, explains how protein machineries in cells are regulated to target RNA molecules for m6A modification.

Jikui Song, an associate professor of biochemistry at UC Riverside who led the study, explained ZCCHC4 controls protein synthesis and cell proliferation by introducing an m6A modification into ribosomes. ZCCHC4, he added, is overexpressed in tumors associated with hepatocellular carcinoma -- the most common type of primary liver cancer.

"This is the first time anyone has determined the crystal structure of ZCCHC4," Song said. "Our discovery can be used for structure-based drug design against cancers and lead to a better understanding of how m6A, a modification associated with numerous biological processes, is installed on ribosomal RNA."

The m6A modification has received enormous attention in recent years due to the important role it plays in RNA metabolism and biology. How this modification is dynamically programmed and distributed in cells, however, remains poorly understood.

To crack the structure of ZCCHC4, Song's team first produced an enzymatically active and structurally rigid ZCCHC4 fragment. The researchers then coaxed this protein to crystallize. Finally, they diffracted the crystals using X-rays and analyzed the data, which led to the eventual discovery of ZCCHC4's structure.

Last year, Song's lab solved the crystal structure for an enzyme that plays a key role in DNA methylation, the process by which methyl groups are added to the DNA molecule.

Next, the research team will continue to explore how various DNA and RNA modifications in cells are created, which has strong implications in health and diseases.