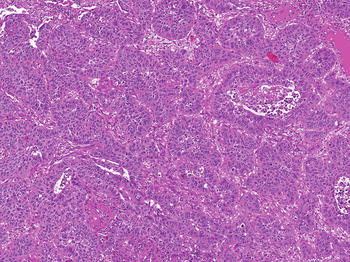 Researchers from Charité – Universitätsmedizin Berlin and the German Cancer Consortium (DKTK) have successfully solved a longstanding problem in the diagnosis of head and neck cancers. Working alongside colleagues from Technische Universität (TU) Berlin, the researchers used artificial intelligence to develop a new classification method which identifies the primary origins of cancerous tissue based on chemical DNA changes. The potential for introduction into routine medical practice is currently being tested.

Every year, more than 17,000 people in Germany are diagnosed with head and neck cancers. These include cancers of the oral cavity, larynx and nose, but can also affect other areas of the head and neck. Some head and neck cancer patients will also develop lung cancer. “In the large majority of cases, it is impossible to determine whether these represent pulmonary metastases of the patient’s head and neck cancer or a second primary cancer, i.e. primary lung cancer,” explains Prof. Dr. Frederick Klauschen of Charité’s Institute of Pathology, who co-led the study alongside Prof. Dr. David Capper of Charité’s Department of Neuropathology. “This distinction is hugely important in the treatment of people affected by these cancers,” emphasizes Prof. Klauschen, adding: “While surgery may provide a cure in patients with localized lung cancers, patients with metastatic head and neck cancers fare significantly worse in terms of survival and will require treatments such as chemoradiotherapy.”

When trying to distinguish between metastases and a second primary tumor, pathologists will usually use established techniques such as analyzing the cancer’s microstructure and detecting characteristic proteins in the tissue. However, due to the marked similarities between head and neck cancers and lung cancers in this regard, these tests are usually inconclusive. “In order to solve this problem, we tested tissue samples for a specific chemical alteration known as DNA methylation,” explains Prof. Capper who, like Prof. Klauschen, is a Scientific Member of the DKTK in Berlin. He adds: “We know from earlier studies that DNA methylation patterns in cancer cells are highly dependent on the organ in which the cancer originated.”

Working with Prof. Dr. Klaus-Robert Müller, Professor for Machine Learning at TU Berlin, the research group employed artificial intelligence-based methods to render this information useful in practice. The researchers used DNA methylation data from several hundred head and neck and lung cancers in order to train a deep neural network to distinguish between the two types of cancer. “Our neural network is now able to distinguish between lung cancers and head and neck cancer metastases in the majority of cases, achieving an accuracy of over 99 percent,” emphasizes Prof. Klauschen. He continues: “To ensure that patients with head and neck cancers and additional lung cancers will benefit from the results of our study as quickly as possible, we are currently in the process of testing the implementation of this diagnostic method in routine practice. This will include a prospective validation study to ensure that the new method can be made available to all affected patients.”

Having worked alongside the researchers from Charité, the Director of the Berlin Center for Machine Learning (BZML), Prof. Müller, is similarly delighted at their results: “Artificial intelligence is playing an increasingly important role, not only in our daily lives and in industry, but also in natural sciences and medical research. The use of artificial intelligence is, however, particularly complex within the medical field; this is why, until now, research findings have only rarely delivered direct benefits for patients. This could now be about to change.”