Mini-Spectrometers - From the smallest component to the dedicated measurement system
18-Dec-2017 - University of California, San Diego 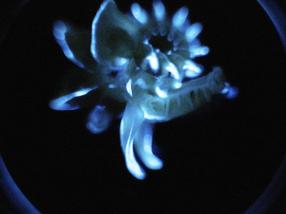 Image of the bioluminescence of Chaetopterus, the parchment tube worm.

Researchers at Scripps Institution of Oceanography at the University of California San Diego have made a discovery with potential human health impacts in a parchment tubeworm, the marine invertebrate Chaetopterus sp., that resides in muddy coastal seafloors.

A new study finds that the tubeworm, also known for its bioluminescence, is found to have a ferritin with the fastest catalytic performance ever described, nearly eight times faster than that of human capabilities.

Ferritin is an important protein found in nearly all living organisms as it manages iron metabolism in cells by storing and releasing it in a controlled manner. In humans, it is critical to iron storage and iron metabolism, helping balance iron in the blood.

"We were surprised to discover that even though the tubeworm ferritin is very similar to human ferritin, it outperforms the human variant, by a lot," said Scripps research scientist Dimitri Deheyn, the lead investigator on the study. "There are major biotechnological research implications to this finding, in particular for the many labs that develop ferritin applications."

This discovery also has important human health implications for biomedical research, as ferritin is an essential protein for those with iron deficiency and overall iron metabolism issues. This discovery can be a new tool in future research of ferritin to use in patients, thanks to its biocompatibility and ability to carry, protect and deliver small molecules as medication to specific targets.

The parchment tubeworm has long been studied by Deheyn's lab, primarily for its bioluminescent capabilities. The species also has the unique ability to keep its blue light glowing for hours, and sometimes days on end, significantly longer than most bioluminescent organisms that typically illuminate only for milliseconds or seconds. A study by former Scripps postdoctoral researcher Renu Rawat suggested that ferritin in the worm's mucus enabled the sustained light production.

Because of the light-stimulating effect, the presence of ferritin in the mucus was considered of interest by the researchers to further understand its role in this unusual light-production pattern in the tubeworm.

"The link to bioluminescence is incredibly important, and we're just beginning to understand how ferritin influences bioluminescence and why ferritin works so much faster in this organism," said Scripps postdoctoral scholar and study co-author Evelien De Meulenaere, who has been studying this tube worm's unique properties for more than three years.

De Meulenaere described ferritin as being shaped like a soccer ball, with openings that take up iron when available, store it and release it when needed. That specific structure allows for a wide range in applications, from medical to environmental. It could help target medication release, function as a safe contrast agent, while also being used for water treatment by selectively taking up and storing contaminants.

In her research, De Meulenaere tested two different approaches to measure enzyme response, covering different time scales. Both approaches compared the reactions of worm ferritin with human ferritin. In the first approach, iron was added to reaction tubes containing the respective ferritins, after which the remaining amount of ferrous iron left in solution was measured over time (1-2 hours). The second analyzed on millisecond scale how much iron oxide was created inside the ferritin, indicated by the generation of "rust" coloration the tube. Both approaches determined the worm ferritin converted iron significantly faster.

The tubeworm is pervasive in nearshore, muddy seafloors. The one used in this study is common throughout San Diego and Southern California, however, different variations of the tubeworm can be found in temperate coastal areas around the world. Considered an invasive species that typically lives in a tube that it builds in the mud, the worm and its tube encasement are also being studied by researchers in Deheyn's Lab to further analyze its resilience to heat.