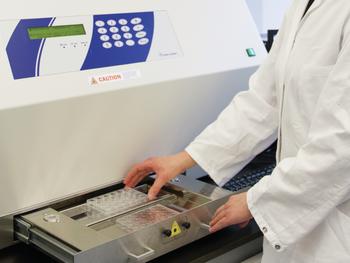 Sun rays damage unprotected skin. Substances in medications or lotions applied to the skin can be chemically modified by sun rays to have a toxic effect on the body. An accredited in-vitro test method at Fraunhofer IGB in Stuttgart measures the phototoxic potential of substances or cosmetics. The skin model was advanced with the addition of pigmentation that enables the testing of self-tanning agents.

Sunbathing without sunscreen can be dangerous. Sun rays do not only damage the skin. Some substances in drugs, cosmetics and medicinal herbs can be toxic to the skin when exposed to ultraviolet light. Experts call the phenomenon phototoxicity. It occurs when a substance absorbs light energy and is thereby chemically modified. Only the modified substance is toxic to the skin, which can cause redness, swelling or inflammation - similar to a sunburn. Companies can examine the phototoxicity of a substance with an in-vitro test methods developed at the Fraunhofer Institute for Interfacial Engineering and Biotechnology IGB. The test procedure is ISO certified and meets the required norms and standards.

Substances are tested on a mature epidermis model by applying them to the surface of the epidermis and exposing the model to defined, but non-toxic, doses of UV radiation. The skin cells that create the model are then tested to verify if they are still alive or have been damaged. “We first look at the skin models under the microscope“, explained Thude. Each sample is then examined with a spectrometer to precisely quantify the extent of cell damage. “If the vitality of the skin model is damaged by more than 30 percent when compared to a non-irradiated model, we classify the test substance as a phototoxic”, said Thude. The test method is validated for aqueous solutions and oils, to the OECD Guideline 432 and the INVITTOX protocol 121, and assessed by the German Accreditation Body (DAkkS).

Another skin model helps discover substances that stimulate melanin production of the skin. Self-tanners are of great interest, since they not only tone the skin, but also help build the body's own UV protection. To identify those substances, researchers add melanocytes to the epidermis model. Melanocytes play an important protective role in human skin: In sunlight they form the pigment melanin which adsorbs harmful UV radiation and thus prevents sunburn. “We irradiate the pigmented skin model with UV light to directly measure increased melanin production,“ explained Thude. They also measure melanogenic substances such as L-dihydroxy-phenylalanine which is a precursor of melanin. Skin lightening substances, such as creams that hide aging spots, can also be tested on the pigmented skin model.

Since 2013, cosmetics whose ingredients have been tested on animals can no longer be sold within the EU. The Fraunhofer IGB develops alternatives based on human cells to verify the biocompatibility of substances.