On the Track of Nanomaterials 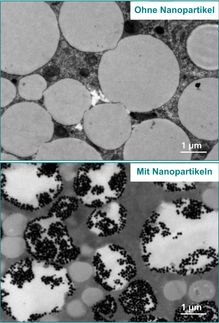 TEM image of adipogenic differentiated stem cell. T: untreated (= without nanoparticles ). B: Cell after treatment with gold nanoparticles. Particles accumulate in the lipid droplets of cell.

A wide range of industrially synthesized nanomaterials are present in products we use daily and, in the meantime, are part of our everyday life. Due to their exceptional properties (e. g., increased UV-filtration or stronger adhesion) they are used in clothes, cosmetics, household goods and paints. But where do these particles, each measuring just a few millionths of a millimeter, end up? What impact do they have on humans and the environment? How dangerous are they really?

In order to find answers to these questions, 11 partners from business and science, as well as Federal and State authorities are developing new, innovative methods for precise and safe evaluation of nanomaterial contamination and the resulting risk potential for humans and the environment within the framework of the project "NanoUmwelt: risk analysis of engineered nanomaterials in the environment".

Dirt-resistant clothes, antibacterial-coated kitchenware, instant soup powder, sunscreen or scratchproof coatings; all these products have one thing in common: increasingly, they contain nanomaterials whose whereabouts and impact on the environment remain unclear. Nanomaterials (Greek nannos = dwarf) are interesting due to their small size and the associated variable physical and chemical properties which give rise to new functionalities. One nanoparticle measures less than a 100 millionth of a millimeter, and is thus 1,000 times thinner than a human hair. Due to the many gaps in our knowledge, the risk emanating from nanomaterials could only be assessed insufficiently up to now. The end of the life cycle of nanomaterials is largely unclear. "Many experts have concerns about the introduction of nanomaterials to the environment," explains Yvonne Kohl, PhD, deputy project coordinator and project manager at the Fraunhofer Institute for Biomedical Engineering IBMT.

To assess the risk of synthetic nanomaterials on humans and the environment, the research project "NanoUmwelt" was started in October 2014. "NanoUmwelt" is a national project, coordinated by Postnova Analytics GmbH with ten other partners. Alongside the Fraunhofer-Gesellschaft, making a major contribution with two institutes, the Federal Environment Agency, the Empa (Swiss Federal Laboratories for Materials Science and Technology), PlasmaChem GmbH, Senova – Gesellschaft für Biowissenschaft und Technik mbH, the Forschungszentrum für Medizintechnik und Biotechnologie FZMB GmbH as well as the universities of Trier and Frankfurt and the Rheingütestation Worms are involved. The project will take 36 months and is funded with 1.8 million Euro by the German Federal Ministry for Education and Research (BMBF) within the framework of the "NanoCare" program. The interdisciplinary research project "NanoUmwelt" deals with the question of the life cycle of nanomaterials, their accumulation and toxicology.

"The goal is to quantify the introduction of synthetic nanomaterials into different environmental compartments, e. g., soil, sewage sludge, flowing water, soil-dwelling organisms, shellfish, fish, and in human samples (blood and urine), and to characterize their manifestation in the respective environment," says Yvonne Kohl. Moreover, highly sensitive methods will be developed for detecting smallest amounts of nanomaterials in environmental and human samples. The investigation will be complemented by environmental and human-toxicological studies in the low-dose range with the main focus on the interaction of the nanomaterials with biological interfaces and barriers.

The Fraunhofer IBMT is making a major contribution to this project in pursuing the question as to the effects on humans and the environment of long-term exposure to low doses of nanomaterials. For this purpose, the scientists of the Fraunhofer IBMT collect environmental samples of functionally relevant ecosystem compartments and develop methods for standardized preparation of the organic material for analysis and long-term storage at -80°C. In order to take into account man as part of the environment, the Fraunhofer researchers are developing an online questionnaire for the identification of potential nanoparticle exposures and, in close collaboration with the Federal Environment Agency, collecting blood and urine samples from young adults. With the aid of these samples, project partners develop sensitive analytical methods to determine to which types of material and in which concentrations humans and the German population and environment are exposed. Furthermore, the Fraunhofer IBMT will develop new models for investigating human-toxic effects of nanomaterials in the low-dose range, and investigate the barrier transfer of nanomaterials (overcoming the lung and the gastrointestinal barrier) to draw conclusions about the nanoparticle uptake in the human body.

"The aim is the quantification of the tiniest amounts of nanomaterials in environmental and human samples and their toxicological assessment," explains Yvonne Kohl. To achieve the project goal, a new approach was chosen: physical and chemical material investigations regarding stability, mobility, functionality and reactivity in the human and environmental samples will be directly linked to biological investigations in the low-dose range. As well as detecting and quantifying nanomaterials at various points of functionally relevant ecosystem compartments, the participating scientists are also investigating the interaction of nanomaterials with biological barriers, including the lung and other barriers such as the human placenta and the gastrointestinal tract.

Since October 2014, scientists from Germany and Switzerland have been tracking down synthetic nanomaterials. The multidisciplinary formation of the team and the variety of technical expertise enable the development of the urgently needed analysis strategies regarding the life cycle of nanomaterials, their accumulation in the environment and nanotoxicology, which are essential for a safe and reliable assessment, prediction and evaluation of risk.

The results of the project "NanoUmwelt" go into the BMBF database "DaNa 2.0 – Data and knowledge on nanomaterials", which makes quality-assured scientific data available to the public in a generally comprehensive manner.