Cell cultures from a machine 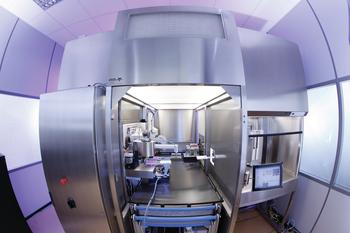 Thanks to this device, the work of cultivating cells can be fully automated. The "cell factory" is large enough to fill a small laboratory.

The human genome has been decoded. Of all the puzzles it contains, though, many remain unsolved. We know that the genome provides the blueprint for various proteins, the building blocks of each and every cell. But what role do they play? Which proteins control cell division in a healthy body, for instance? And what takes place in tumor tissue in which cells incessantly subdivide and control over proteins gets out of hand?

To get to the bottom of the functioning of various proteins, researchers start by cultivating cell cultures. They add a few cells to a petri dish, add nutrient and regularly check for resulting cell growth. Once suitable colonies of cells have taken hold, the researcher uses a pipette to transfer these to a new vessel where investigation of the cells can continue. To date, for the most part researchers have had to carry out these steps by hand – in time-consuming routine work. Researchers at the Fraunhofer Institute for Manufacturing Engineering and Automation IPA in Stuttgart, at the Fraunhofer Institute for Physical Measurement Techniques IPM in Freiburg and at the Fraunhofer Institute for Applied Information Technology FIT in Sankt Augustin have now teamed up with colleagues at the Max Planck Institute of Molecular Cell Biology and Genetics in Dresden to create a system that completely automates the process of cultivating cells.

The device consists of an array of modules: One of these is a robot that transports the vessels containing the cell cultures, known as multititer plates, from one place to the next. Dr. Albrecht Brandenburg, group manager at IPM describes another module: "A microscope regularly inspects the cells to assess the status and growth of the cultures. It transfers the s.o. plates to the microscope stage, focuses, switches lenses and activates the light sources it needs. The entire optical system is designed to withstand and operate in the high-humidity conditions the cells require. The results of microscopic analysis are fed into the system control, a capability never seen in automated cell cultivation before."

An example: A computer program assesses the microscope images and checks to determine how densely the surface of the vessel is already covered in cells. If suitable cell colonies have formed, another module, a hollow needle, picks cells ranging between 100 and 200 micrometers in size and transfers them to a new container. System users can train the software responsible for this pattern recognition – and thus for identifying the cells themselves as such: in the case of new cell types, they can define sample areas as foregrounds and backgrounds. In subsequent worksteps, the system then identifies the cell type automatically.

Large enough to fill a small lab, the device was recently set up at the Max Planck Institute. There, it will help researchers decode the functions of various proteins. Scientists inject cells with the segment of the human genome that delivers the blueprint for the proteins under investigation. The location in the cell at which the proteins are later found gives clues as to the proteins` respective functions. The system achieves a throughput of 500 cell cultures each month. The cell factory can be adapted for use in other applications as well: For instance, it can help test the effectiveness of various drugs. Because the system is modular, researchers in science and industry can also opt to automate just certain of the steps involved.