Shining some light on the obscure proteome 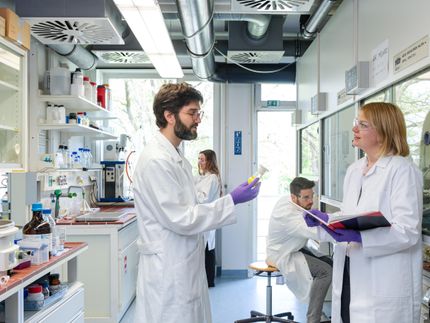 Group Leader in Chemical Proteomics, Dr. Guillaume Médard, and his research group in the lab.

Mass-spectrometry based proteomics is the big-data science of proteins that allows the monitoring of the abundance of thousands of proteins in a sample at once. Therefore, it is a particularly well-suited readout for discovering which proteins are targeted by any small molecule. An international research team has investigated this using chemical proteomics.

Histone deacetylase (HDAC) inhibitors are a class of drugs used in oncology. An international research team involving scientists at the Technical University of Munich (TUM), Cornell University in Ithaca (USA), the German Cancer Research Center (DKFZ) in Heidelberg and Martin Luther University of Halle-Wittenberg has now investigated the effects of some HDAC drugs in more detail. The scientists researched whether those epidrugs affect proteins other than the HDACs which they are designed to inhibit.

“To do so, target deconvolution by chemical proteomics is the method of choice. Hence, we first made new chemical tools - the so called affinity matrices - that would allow us to systematically profile the HDACs,” explains Dr. Guillaume Médard, group leader for chemical proteomics at the TUM chair of Proteomics and Bioanalytics led by Prof. Bernhard Küster.

“I profiled 53 drugs and most of them, but not all, hit their intended HDAC target,” stated Severin Lechner, a doctoral candidate at the TUM School of Life Sciences. “There were, however, some surprises. Drugs used in hundreds of scientific studies were not as selective as it had been assumed. Many had additional targets that were not previously known.

These results highlight the power of proteomic approaches, as they can probe the binding to thousands of proteins at once. Finally, the team identified several molecules with outstanding selectivity, making them the inhibitors of choice for future scientific studies.

The target landscape of HDAC drugs

“The most unexpected finding was that MBLAC2 is off-target for half of the profiled molecules,” Lechner continues. This protein is not well characterized. Coincidentally, the team of Prof. Maurine Linder in Cornell researched on it at the same time. The two groups collaborated and confirmed that the protein is indeed hindered in performing its function in presence of the drugs.

Working with the group of Prof. Michael Pfaffl at TUM, Lechner examined the hinted unexplained phenotypic effects of some drugs and proved that MBLAC2 inhibition or knock-down leads to an accumulation of extracellular vesicles in the extracellular space. Extracellular vesicles are small membrane-bounded particles secreted by cells and transported through the whole body to transmit biomolecules and information between cells and tissues.

“We are excited because we have uncovered a new player in this field of biology that notably encompasses exosomes, which play crucial roles in neurology, immunology and oncology,” explains Médard. “We are now designing molecules that only hit MBLAC2 so that we can probe this obscure protein in a range of model systems.”

This study will be useful to those who want to use HDAC inhibitors for probing biology or for therapeutic use. It helps in choosing the right chemical tool. It is also a valuable set of data for medicinal chemists who need to understand how chemical structures relate to potency and selectivity to make tomorrow’s epidrugs.