The Retina as a Potential Biomarker for Reduced Brain Matter 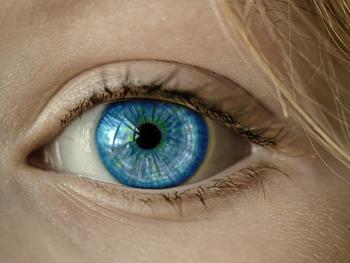 Researchers from the Department of Ophthalmology at the University Hospital Bonn (UKB) and Deutsches Zentrum für Neurodegenerative Erkrankungen (DZNE) have found a close connection between the dimensions of retinal structures and those of the brain. They report on this in the journal “Scientific Reports”. Their study results suggest that assessments of the eye’s retina could help to detect a loss of brain substance, i. e. “brain atrophy”. The findings are based on data from the so-called Rhineland Study.

Within the framework of the Rhineland Study – a large-scale population study in the Bonn city area – DZNE is researching key factors for a healthy life. Determining biomarkers for dementia and other neurodegenerative diseases is one of the study’s goals. One focus is on the human retina, for which the DZNE closely cooperates with the Department of Ophthalmology of UKB. “There is evidence that the retina can serve as a window into the brain, so to speak. Our current results support this view,” says Prof. Dr. Frank G. Holz, Director of the Department of Ophthalmology of UKB. “Compared to earlier studies, we used more advanced technology and investigated a larger group of people.”

State-of-the-art imaging in the Rhineland Study

In almost 3,000 participants of the Rhineland Study aged between 30 and 94 years, the retina was assessed using “spectral domain optical coherence tomography” (SD-OCT) – a technique that provides detailed images of the retina and its various layers. In addition, brain scans were performed by magnetic resonance imaging (MRI). The data were analyzed using sophisticated software algorithms. “This allowed for automated identification and determination of thickness and volumes, of both the different retinal layers and the different structures of the brain. Next, we looked for associations between the volume of the retina and the volume of certain brain structures,” explains Dr. Dr. Matthias M. Mauschitz, resident at UKB’s Department of Ophthalmology, postdoctoral scientist at DZNE and first author of the current publication.

“There was a close relation between layers of the inner retina and the so-called white matter in the brain,” Mauschitz adds. “The thinner these retinal layers, the smaller the volume of the brain’s white matter.” By contrast, sections of the outer retina were mainly associated with the gray matter of the cerebral cortex. In the brain’s occipital lobe, where visual processing happens, these associations were particularly pronounced. And the researchers found further relationships. “Interestingly, the thickness of different retinal layers correlated closely with the volume of the hippocampus. This is an area of the brain that plays a central role in memory and is often affected in dementia,” says Prof. Dr. Dr. Robert P. Finger, senior ophthalmologist at the UKB’s Department of Ophthalmology.

“Imaging of the retina using SD-OCT is relatively simple, non-invasive and inexpensive. The current results suggest that SD-OCT measurements of the retina could potentially serve as biomarkers for brain atrophy and to monitor progression of certain neurodegenerative diseases,” says Prof. Dr. Dr. Monique M. B. Breteler, Director of Population Health Sciences at DZNE and head of the Rhineland Study. “Further population-based studies as well as studies in patient groups and over a longer period of time are now needed to verify these results in a clinical setting.”