Biosensors made of cellulose 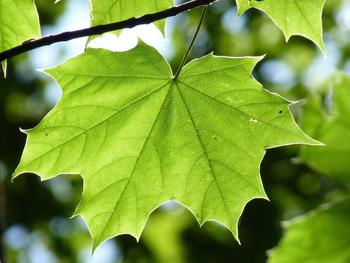 Sensors modeled on the structure of leaves (symbolic image)

Electroencephalography (EEG), electrocardiography (ECG), electromyography (EMG) – all of these non-invasive medical diagnostic methods rely on an electrode to measure and record electrical signals or voltage fluctuations of muscle or nerve cells underneath the skin. Depending on the type of diagnostics, this can then be used to measure electrical brain waves, or the currents in the heart or muscles. Present methods use metal sensors which are attached to the skin using a special gel to ensure continuous contact. Researchers at the University of Korea and Technische Universität Berlin have now developed so-called biosensors made of the plant material cellulose. They not only offer better and more durable conductivity than conventional electrodes. They are also 100 percent natural, reusable, do not cause skin irritation like other gels and are biodegradable. The paper “Leaf inspired homeostatic cellulose biosensors” has now been published in the journal Science Advances.

The crucial keyword for the new sensors is: homeostasis. In biology, this refers to the maintenance of a state of equilibrium. This is how leaves, for example, regulate the osmotic pressure in their cells, i.e. how much water they store. This internal cell pressure depends on the water content of the neighboring cells, but also on the environment (dry or humid) and is constantly readjusted.

“Most people know the feeling of walking through a damp garden with bare feet. Leaves stick to the soles of our feet and simply don’t fall off, even when we move,” explains Professor Klaus-Robert Müller, head of the Machine Learning group at TU Berlin and director of the Berlin Institute for the Foundations of Learning and Data (BIFOLD). “The reason that leaves cling so effectively to our skin is due to the swelling properties of cellulose, the material that the cell walls of plants are made of, and is based on the principle of homeostasis.”

Sensors modeled on the structure of leaves

Until now, cellulose has mainly appeared as a material for synthesis or filtration. Because cellulose itself is not conductive, it seemed unsuitable as potential material for electrodes. When cellulose fibers are placed in salty water, however, they swell and show great electrical conduction properties.

Inspired by the structure of leaves, the researchers have developed, analyzed and tested biosensors consisting of two layers of cellulose fibers that resemble the leaf structure and can be saturated with salt water. On top of the cellulose material lies a carrier membrane which in turn docks to a metal electrode with a cable.

The researchers have already tested the sensors in various application scenarios and on different skin types. “We were also able to demonstrate the versatility and robustness of the biosensors in combination with machine learning algorithms that were tested in challenging real-world situations. Tests have been conducted with test persons riding a bicycle or playing a computer game with a brain-computer interface, meaning the subjects were moving during the measurement, which can potentially generate artifacts,” says Müller.

Other advantages of the biosensors: They allow mass production in a simple and cost-effective process, are recyclable, skin-friendly and biodegradable. Klaus-Robert Müller is convinced: “These homeostatic cellulose biosensors are suitable for a broad range of clinical and non-clinical applications.”