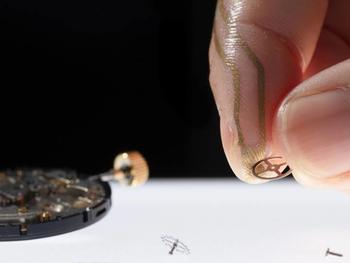 Someya-Yokota-Lee Group / The University of Tokyo

The ultrathin nanomesh sensor has an unnoticeable effect on the users’ sensitivity and ability to grip objects.

Scientists from the Technical University of Munich (TUM) and the University of Tokyo have developed an ultrathin pressure sensor that can be attached directly to the skin. It can measure how fingers interact with objects to produce valuable data for technological or medical applications. The sensor has an unnoticeable effect on the users’ sensitivity and ability to grip objects, and it is highly resistant to disruption from rubbing.

Our hands and fingers are our primary tools for direct interaction with materials, other human beings and our immediate environment. Finding out how the sense of touch actually works and having ways to record it would be a great benefit not only for research in the fields of medicine, sports or neuroengineering, but also for archiving skills.

However, capturing this data is not easy. A wearable sensor on a finger has to be extremely thin and flexible, because fingertips are so sensitive that anything could affect the feeling. In addition, a sensor worn on hands needs to be resistant to rubbing or other physical damage.

To overcome this problem, David Franklin, Professor for Neuromuscular Diagnostics at TUM and his colleagues teamed up with researchers from the University of Tokyo. Here, a group of scientists led by Professor Takao Someya had developed a sensor covered by four ultrathin layers of a functional and porous material named “nanomesh sensor”, which “turned out to be just perfect”, as Franklin says.

Thinner than a human hair

“Both nanomesh layers were made by a process called electro spinning,” Someya says. The polyurethane fibers are between 200 to 400 nanometers thick, about two hundreds the thickness of a human hair.

The other two layers are a stencil-like network of lines that form the functional electronic component of the sensor. They are made from gold and use a supporting frame of polyvinyl alcohol, a polymer which is also used for contact lenses. After the manufacturing process, the polymer is washed away to leave only the gold traces it was supporting.

The researchers performed a rigorous set of tests on the sensors with the help of 18 participants. All of them confirmed that the sensors were imperceptible and affected neither the ability to grip objects through friction, nor the perceived sensitivity compared to performing the same task without a sensor attached. This was exactly the result the researchers were looking for.

“In the past, we only had relatively rigid measuring instruments that interfere with the sense of touch” Franklin says. “Think about your pet at home, perhaps your cat or dog. Which instrument is both soft and sensitive enough to measure how much pressure you use when caressing it? Until now this was impossible, but with this new nanomesh sensor applied on our fingers we suddenly can.”

Designed to archive knowledge of any delicate work

One way the novel applications could be used is the digital archiving of delicate craftwork by artisans. “Let’s say you want to study how to make a handcrafted watch,” says Franklin. “How could we capture the ability of the incredible talented watchmakers for posterity? We would like to know how they actually pick up and manipulate the tiny pieces while building the watch. By applying the ultrathin nanomesh sensor on the fingertips, we could measure the force and record it without influencing the finger’s sense of touch.”

In fact, this is the first time in the world that a fingertip-mounted sensor with no effect on skin sensitivity has been successfully demonstrated. And the sensor maintained its performance as a pressure sensor even after being rubbed against a surface with a force equivalent to atmospheric pressure, 300 times without breaking, the scientists discovered. “This shows that we can actually measure the manipulation of a huge range of objects – this has never been possible before.”