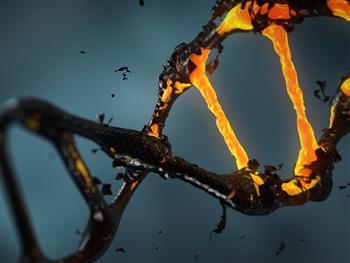 CRISPR-Cas9 can alter genes at pre-defined sites in specific ways, but it does not always act as planned. An LMU team has now developed a simple method to detect unintended ‘on-target’ events, and shown that they often occur in human stem cells.

The gene-editing system CRISPR-Cas9 has revolutionized molecular biology, as it greatly simplifies altering gene sequences in a targeted fashion. It has already become an indispensable research tool, and early trials of its application for therapeutic purposes are now underway. In both laboratory and clinical settings, mutations introduced by the system must be restricted precisely to the targeted location (i.e. mutations elsewhere in the genome must be avoided) and the genetic alteration itself must be the intended one. However, the CRISPR systems currently in use are not entirely accurate, and can therefore introduce potentially harmful mutations both within the target gene and at other positions in the genome. LMU researchers led by neurobiologist Professor Dominik Paquet at the Institute for Stroke and Dementia Research now report the development of a simple method, which allows them to detect unintended alterations in the target gene itself. – Their results indicate that such on-target events occur at high frequency. Thus the new method represents an important contribution to ongoing efforts to improve the fidelity and efficacy of CRISPR-based gene editing in research, and as a potential means of correcting mutations associated with genetic diseases.

CRISPR-Cas9 enzyme systems make it possible to introduce desired mutations at particular sites in genes, because they can be “programmed” to specifically introduce a double-stranded break (DSB) at any specific site in the genomic DNA. Such breaks are subsequently repaired by the cell’s dedicated damage-control mechanism. The ability to target the CRISPR-Cas complex with high specificity enables scientists to inactivate genes at will, or to insert new sequences at the site of the DSB. However, additional mutations may also occur accidentally, either at sites other than the intended location (off-target effects) or within the target gene itself (on-target effects). “An on-target effect of CRISPR can result either in the reduction or complete loss of the targeted gene’s function,” says Paquet. “Off-target effects are now well understood, and there are reliable techniques for detecting them. But on-target effects were only discovered quite recently – and a simple and generally accepted method for their detection has been lacking.”

He and his colleagues have now introduced such a method, which reliably signals the presence of unintended mutations within the targeted genetic locus. It is based on an established technique for the characterization of genetic variation (genotyping) with the aid of the polymerase chain reaction (PCR), and its authors refer to it as quantitative genotyping PCR (qgPCR). In addition, they check for changes at sites in the genome at which the maternally and paternally inherited DNA sequences differ from each other.

The team applied the new method to induced pluripotent stem cells (iPSCs) derived from human patients, and tested for presence and frequency of on-target effects following the use of CRISPR to edit the genome at a designated site. iPSCs are generated by reprogramming somatic cells from patients so that they undergo a transition to a new cell fate. These reprogrammed stem cells have important uses in biological research, as well as promising therapeutic implications. “Our method reveals that on-target effects of CRISPR-mediated gene editing in human stem cells occur very frequently. – Depending on which repair mechanism comes into play, up to 40% of all treated cells can carry such mutations,” says Paquet. In an experimental model of Alzheimer’s disease (which recapitulates significant features of the disorder in cultured cells), the group went on to demonstrate that such CRISPR-mediated on-target effects actually delay the onset of symptoms. – This finding provides a striking example of how instances of mistargeting can lead to misinterpretation of the results of studies done on cells that have been genetically edited with CRISPR. The authors recommend that the new method should be used as an indispensable quality-control measure to identify unintentionally modified cells, and increase the reliability – and thus the utility – of CRISPR-Cas9.