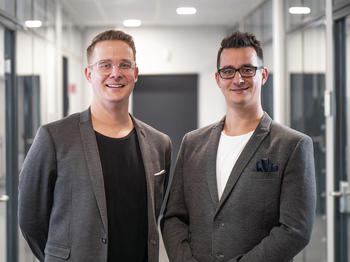 After almost 40 years as managing director of FRITSCH GmbH, Robert Fritsch was bit farewell on his retirement on 1st January 2020. He looks back on times of modernization, economic growth and success.

In 1920 the medium-sized family business was fund in Idar-Oberstein as a technical precious stones dealer by Max and Alfred Fritsch. After the Second World War Willi and Paul Fritsch, sons of Alfred Fritsch, took over the management.

As the second generation of the company, they were looking for a new business idea, because more and more synthetic materials found their way into the application area of FRITSCH. Soon it became clear to focus on the niche market of application-oriented laboratory instruments for sample preparation and particle sizing. This specialization led the laboratory instrument manufacturer to success: Already since the mid-1950s FRITSCH has been one of the leading manufacturers in this field. The first patent application for a fully automatic Planetary Mill followed in 1962. In the following years FRITSCH continued to grow steadily, whereupon the construction of a production hall in Georg-Weierbach 1973 and later the complete relocation of the administration followed.

The third generation was characterized by Robert Fritsch, son of Paul Fritsch, who took over the management in 1982. The breakthrough in high-tech particle sizing was achieved with the Laser Particle Sizer ANALYSETTE 22 under the leadership of him. Since then research, development and production have continued steadily. Further patents in the fields of sample preparation and particle sizing followed and a new production hall was opened in 2014. Because FRITSCH stands for Quality “Made in Germany” for over 100 years and is one of the leading manufactures in the field of milling, sieving, dividing and sizing.

For the 100th anniversary, the 4th generation takes over the management: Maximilian und Sebastian Fritsch, just as their father, grandfather, great uncle, great grandfather and great grand uncle showed them. Maximilian Fritsch, who came to the company after completing his apprenticeship as an IT-manager in 2009 will in future work as Commercial Manager. In his new position, he particularly appreciates the contact to the employees as well as developing new ideas and strategies. Sebastian Fritsch, who is working in the sales department of FRITSCH for more than 10 years, is now the new Managing Director. As a child he dreamed of a career as professional soccer player, but since his apprenticeship at FRITSCH in 2006 he knew „this is my future!”.

The brothers set themselves as a goal to expand further and to lead the company as well as the team in a successful future.