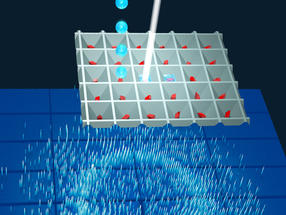 Researchers from the Department of Atomically Resolved Dynamics of the Max Planck Institute for the Structure and Dynamics of Matter (MPSD) at the Center for Free-Electron Laser Science in Hamburg, the University of Hamburg and the European Molecular Biology Laboratory (EMBL) outstation in the city have developed a new method to watch biomolecules at work. This method dramatically simplifies starting enzymatic reactions by mixing a cocktail of small amounts of liquids with protein crystals. Determination of the protein structures at different times after mixing can be assembled into a time-lapse sequence that shows the molecular foundations of biology.

The functions of biomolecules are determined by their motions and structural changes. Yet it is a formidable challenge to understand these dynamic motions. One method that illuminates them is time-resolved X-ray crystallography, where the reaction of a biological molecule is triggered and then snapshots are taken as it reacts. However, triggering these reactions is extremely challenging as it usually involves lasers and protein reactions that can be started by light.

The new “Liquid Application Method for time-resolved Analyses (LAMA)” overcomes the need for optical triggers. It is tailored to the study of biologically relevant reaction time-scales, which are on the order of milliseconds (10-3) to seconds or even minutes. These time-scales are of particular interest to biologists and pharmaceutical researchers as they often reveal the structural changes relevant to a particular biological function or the turnover of a drug.

The highly intense micro-focused X-ray beams available on EMBL beamline P14-2 allowed the interrogation of the system on a millisecond time-scale. Importantly, the new “LAMA” method makes the whole experiment a lot simpler than previous approaches.

To start a reaction, a few picoliters (10-12 liter) of the reactant are mixed with microcrystals of the target protein. Reaction snapshots are then recorded as the enzyme proceeds with the turnover of the reactant. Excitingly, this new method has great potential on existing and up-coming high-brilliance synchrotron radiation sources, allowing many more researchers to carry out time-resolved crystallography studies.

The “LAMA” method has already been implemented as a generally accessible option at the new time-resolved macromolecular crystallography end station on the EMBL beamline P14-2 at the PETRA III synchrotron at DESY.

Many more important insights into biochemical processes will come about by applying such cutting-edge technologies. Their use will allow us to answer some of the most pressing questions on key health or environmental issues.