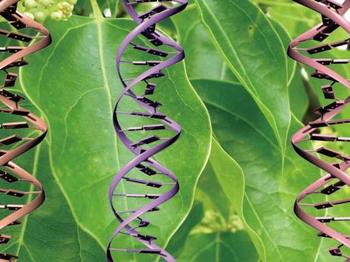 Proper DNA inheritance is essential for healthy cell growth and division. The same goes for the genetic material found in chloroplasts: the energy centers of all plant cells.

Chloroplast genomes -- likely vestiges of ancestral bacteria -- are organized into DNA-protein complexes called nucleoids. While significant work has been done to understand the dynamics of DNA in the nuclei of plant cells, little is known about the dynamics of chloroplast nucleoids.

Now Yusuke Kobayashi and Yoshiki Nishimura of Kyoto University, Osami Misumi of Yamaguchi University, and other collaborators have isolated and characterized a protein in chloroplasts that is essential for proper nucleoid segregation.

"To understand the dynamics of chloroplast nucleoids, we focused on their behavior during chloroplast division in the green alga Chlamydomonas reinhardtii," explains Nishimura.

"We screened about 6,000 specimens with random mutations in their DNA and then isolated the ones with defective nucleoid segregation."

One of these mutants was found to have a defect in a gene the team calls moc1, for "Monokaryotic Chloroplast 1". The chloroplasts in this mutant possessed only a single nucleoid, and showed unequal segregation during chloroplast division. A homologous moc1 gene was then found in a land plant commonly used for research, Arabidopsis thaliana. When mutated, the researchers discovered that these organisms exhibit growth defects and abnormal nucleoid segregation.

After extensive analysis of this new gene, the team discovered that moc1 functions as a chloroplast-specific 'Holliday junction resolvase', which Nishimura continues, "is very important in untangling a DNA structure called Holliday junctions. These genes have never been found in chloroplasts, until now."

Continuing with their study, the researchers successfully visualized the activity of moc1 on Holliday junctions through the use of high-speed atomic force microscopy and DNA origami technology. They observed moc1 binding to the core of Holliday junctions and cutting them symmetrically.