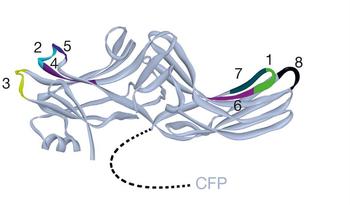 Schematic drawing of β-Arrestin2. With these biosensors (colored), scientists were able to study spatial movements of the protein in real time in living cells.

International scientists led by Carsten Hoffmann and Martin Lohse of the University Würzburg, Germany, identified for the first timeβ-Arrestin as an independent signaling molecule. The protein modulates a pharmaceutically important pathway. It leads to new drug targets, for example in pain therapy.

The most important target for drug research are G-protein coupled receptors (GPCR). Around 30 percent of all medicine work on more than 800 members of this class of proteins. GPCRs are crucial for cell communication and the processing of pain and sensory stimuli.

The protein β-Arrestin regulates GPCR. However, it remained unclear how it functions on a molecular level. With biosensors, scientists were able to explain the interaction on a temporal and spatial level. "When I discovered β-Arrestin in 1990, it looked like, it is there to disable receptors," said Lohse. "That it acts as an independent signaling molecule, we could demonstrate only now with the latest technology."

Experiments showed that β-Arrestin was transferred into an active state by receptors, which lasted longer that its interaction with the receptor. The change was so significant that a cycle of activation and deactivation of β-Arrestin was detectable - a criterion for the definition of an independent signaling molecule. At the same time, American collaborators were able to show that the type of activation of β-Arrestin depends on the activating receptor. The exchange with American colleagues pushed the project enormously. Hoffmann became aware of their work during a conference. "This project went through ups and downs," Hoffmann remembers. "We often had to be patient, but it was worth it."

By molecular reinforcing or blocking of β-Arrestin, the effect of future drugs could be more specific and associated with fewer side effects. Due to their diversity, GPCR and now possibly β-Arrestin are important targets for pharmaceutical substances. Hoffmann expects a particularly good progress in long-term treatment with strong painkillers. The body gets used to the medicine and becomes increasingly depended on higher doses. At the same time, side effect will appear even stronger. New medicine targeting specifically β-Arrestin on a molecular level could minimize this tolerance and therefore its side effects, and could enable a more effective long-term therapy.

Hoffmann is optimistic about future projects. As a next step, he wants to test whether activation of β-Arrestin can be changed by model substances. "That would be the first step to new medical drugs."