Drug targets for a form of melanoma from genetic mutations found in humans, dogs and horses 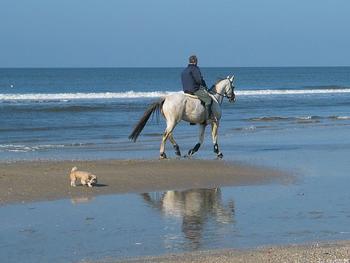 New drug targets for a rare form of melanoma may result from the discovery of similar genetic mutations found in humans, dogs and horses under a first-ever tri-species DNA sequencing study involving a University of Guelph researcher.

Melanoma is a cancer that most commonly occurs in the skin in people, but a subtype called mucosal melanoma arises in non-skin locations such as sinuses, nasal passages and mouth. Oral melanoma in dogs is much more common than in humans and also has a poor prognosis, while melanoma in horses is generally less aggressive.

Currently there are no known risk factors for this cancer in humans, which is often diagnosed late. In all species, the main treatment is surgical removal of the tumour.

The study was designed to pinpoint key genes that are mutated in mucosal melanoma.

The study was the first to compare cancer genomes across human, canine and equine tumours, the first to sequence horse tumours and the first sequencing study of this scale on dog melanoma.

Comparing cancers across species may help in pinpointing the most relevant drug targets, said pathobiology researcher Geoffrey Wood, assistant co-director of U of G's Institute for Comparative Cancer Investigation (ICCI).

He conducted the study with David Adams, Kim Wong and their collaborators at the Wellcome Trust Sanger Institute in Cambridge, U.K.

"This study is a great example of using a 'one health' approach to leverage similarities and differences across species and find mutations in cancer driver genes -- mutations in genes that are central to the behaviour of the cancer cell and cause it to become malignant," said Wood.

"It can be hard to find those drivers as cancer genomes are full of random mutations that do not impact the cell's behaviour very much. But if you find commonly mutated genes across multiple species in the same cancer type, they are likely driver genes and could be targeted for the development of new therapies."

The research team sequenced the genomes of mucosal melanoma tumours from 46 humans, 65 dogs and 28 horses. Numerous canine and equine samples were contributed to the study by Wood and the Companion Animal Tumour Sample Bank, part of the ICCI.

The team discovered a handful of genes that were commonly mutated in all species.

Interest has grown in the use of immunotherapy, or vaccine therapy, to treat melanoma in humans and dogs, said Wood. But the study found far fewer mutations in mucosal melanoma than in skin melanoma.

With fewer mutations, this cancer may be more difficult for the immune system to detect. That might explain why current immunotherapy often fails in oral melanoma in dogs and mucosal melanoma in humans, he added.

"Understanding the genetic changes underpinning mucosal melanoma suggests why people with this particular type of cancer may not benefit from immunotherapies," said Wong, lead author of the study.

Using this cross-species approach has some added advantages, explained Wood.

"Spontaneous tumours in dogs are gaining recognition as 'models' of human cancers for the development of therapies that can benefit both species," he added. "This study shows the importance of understanding the genetic similarities and differences of cancers across species so that the most biologically relevant drug targets are prioritized."