Important tool in the battle for food security 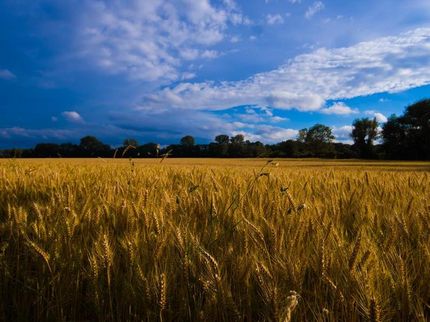 Wheat cultivation in the field.

Scientists from the Max Planck Institute for Plant Breeding Research and the University of Cologne in Germany together with colleagues from China have unravelled how wheat protects itself from a deadly pathogen. Their findings, published in the journal Nature, could be harnessed to make important crop species more resistant to disease.

As a staple food for 40 % of the world’s population, it is hard to overstate the importance of wheat for food security.

Crop resilience in a changing climate and resistance to infectious diseases will be the limiting factors for future food stability. In the case of wheat, one of the most economically significant pathogens is stem rust, a vicious fungus which can have devastating effects on yields.

Although stem rust has been infecting wheat since pre-Christian times, through the efforts of breeders and plant pathologists it had been possible to prevent any significant epidemics in the world’s major wheat growing areas in the last 50 years of the 20th century. Unfortunately, this rosy picture was shattered in 1998, with the emergence of a new, highly virulent variant of wheat stem rust in Uganda. Ug99, as it is known, can attack up to 80% of the world’s wheat varieties resulting, in some cases, in complete loss of yield from infected fields. In seeking to provide crops with resistance against new and emerging plant pathogens, plant scientists and breeders often scour wild varieties of some of our staple crops for genes that may provide effective immunity. The emergence of Ug99 lent particular impetus to such efforts and led to the identification of Sr35, a gene which protects against Ug99 when introduced into bread wheat.

Now, scientists led by Jijie Chai and Paul Schulze-Lefert from the University of Cologne and the Max Planck Institute for Plant Breeding Research in Cologne, Germany, and Yuhang Chen from the Chinese Academy of Sciences, China, have decoded the structure of the Sr35 wheat protein. This allowed them to explain how Sr35 protects Einkorn wheat against Ug99.

Sr35 is an example of a nucleotide-binding leucine-rich repeat (NLR) receptor inside plant cells that detects the presence of invading pathogens. NLR activation is triggered by the recognition of pathogen “effectors”, small proteins that are delivered into plant cells by invading microorganisms in order to weaken the plant. Each NLR typically binds to one type of effector.

When Sr35 is activated, five receptors assemble together into a large protein complex, which the researchers term the “Sr35 resistosome”. Such resistosomes have the ability to act as channels in the plant cell membrane. This channel activity sets in motion powerful immune responses that culminate in the suicide of plant cells at the site of infection as a sort of self-sacrifice to protect the rest of the plant.

In this study, the researchers succeeded for the first time in resolving the structure and describing the immune function of a resistosome from a crop species.

The scientists began by synthesizing both Sr35 and its corresponding Ug99 effector in insect cells, a strategy that allowed them to isolate and purify large amounts of Sr35 resistosomes, and used cryogenic electron microscopy, a technique in which samples are frozen to cryogenic temperatures allowing for the determination of biomolecular structures at atomic resolution. Alexander Förderer, who spearheaded the study says: “In the structure of Sr35 we could identify those parts of the protein that are important for Ug99 effector recognition. With this insight, I hope that we can generate new NLRs that can be applied in the field to protect elite wheat varieties against Ug99 and in this way contribute to global food security.”

Armed with their knowledge of the structure of the Sr35 resistosome, Alexander Förderer and his co-authors Ertong Li and Aaron W. Lawson set about determining whether they could now repurpose non-functional receptors of susceptible elite varieties of barley and wheat to recognize the Ug99 effector. They alighted on two proteins that, while similar to Sr35, do not recognize Ug99. When they swapped in the elements of Sr35 known to contact the Ug99 effector, the scientists could turn these proteins into receptors for the Ug99 effector.

According to Paul Schulze-Lefert, “This study also illustrates how nature has used a common design principle to build immune receptors. At the same time, these receptors have evolved in such a way that they have retained the flexibility to generate new receptor variants that can provide immunity to other microbial pathogens such as viruses, bacteria or nematodes".

Jijie Chai points out that the insights gained in this study “open up the opportunity to improve crop resistance by engineering plant resistance proteins that recognise an array of different pathogen effectors.”