This image shows the SARS-CoV-2 virus's main protease, Mpro, and two strands of a human protein, called NEMO. One NEMO strand (blue) has been cut by Mpro, and the other NEMO strand (red) is in the process of being cut by Mpro. Without NEMO, an immune system is slower to respond to increasing viral loads or new infections. Seeing how Mpro attacks NEMO at the molecular level could inspire new therapeutic approaches. 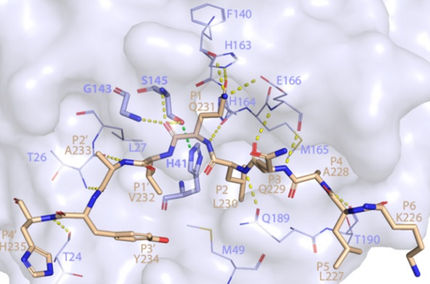 This image shows how SARS-CoV-2 Mpro recognizes and cuts NEMO based on the crystal structure determined using a powerful X-ray beam at SSRL Beam Line 12-2.

Over the past two years, scientists have studied the SARS-CoV-2 virus in great detail, laying the foundation for developing COVID-19 vaccines and antiviral treatments. Now, for the first time, scientists at the Department of Energy’s SLAC National Accelerator Laboratory have seen one of the virus’s most critical interactions, which could help researchers develop more precise treatments.

The team caught the moment when a virus protein, called Mpro, cuts a protective protein, known as NEMO, in an infected person. Without NEMO, an immune system is slower to respond to increasing viral loads or new infections. Seeing how Mpro attacks NEMO at the molecular level could inspire new therapeutic approaches.

“We saw that the virus protein cuts through NEMO as easily as sharp scissors through thin paper,” said co-senior author Soichi Wakatsuki, professor at SLAC and Stanford. “Imagine the bad things that happen when good proteins in our bodies start getting cut into pieces.”

The images from SSRL show the exact location of NEMO’s cut and provide the first structure of SARS-CoV-2 Mpro bound to a human protein.

“If you can block the sites where Mpro binds to NEMO, you can stop this cut from happening over and over,” SSRL lead scientist and co-author Irimpan Mathews said. “Stopping Mpro could slow down how fast the virus takes over a body. Solving the crystal structure revealed Mpro’s binding sites and was one of the first steps to stopping the protein.”

The research team from SLAC, DOE’s Oak Ridge National Laboratory, and other institutions published their results in Nature Communications.

NEMO is part of a human immune system known as the NF-κB pathway. You can think of NEMO and the NF-κB pathway as if they were a card reader and wiring on the outside of a locked building entrance door. If the wires to the card reader are cut, the door will not open, meaning a person (or an immune system activator, like NEMO) is stuck outside, unable to do whatever they came to do.

The NF-κB pathway is a critical part of protective inflammatory responses. When NEMO is cut, our immune response can’t be activated, resulting in various detrimental effects to our body. COVID-19 viral infections could be made worse if Mpro destroys NEMO, helping the virus evade our innate immune responses. Additionally, a separate study by researchers at institutions in Germany found that the loss of NEMO by the action of Mpro could lead to damage in certain brain cells, causing neurological symptoms observed in COVID-19 patients, the researchers said.

One drug that is currently approved for emergency use targets Mpro proteins by providing an infected person with an Mpro inhibitor. This kind of inhibitor drug could be strengthened now that the location of NEMO’s cut has been observed.

“The crystal structures of NEMO and Mpro provide us with the targets to develop treatments that stop these cuts from happening,” SLAC scientist and co-first author Mikhail Ali Hameedi said. “Although current antiviral drugs can target Mpro, seeing the molecular details of how Mpro attacks NEMO will help us develop new treatments in the future as Mpro mutates.”

Finding ways to improve antiviral inhibitors is especially important with SARS-CoV-2. Among the coronaviruses—a group that includes the original SARS-CoV and MERS‐CoV viruses—SARS-CoV-2’s Mpro is the most effective at attaching to and cutting NEMO. SARS-CoV-2’s Mpro grabs NEMO with a tighter grip than its counterparts in other coronaviruses and could be cutting hundreds of other critical proteins in human host cells, such as those associated with blood disorders, the researchers said.

To predict how well Mpro binds to NEMO, researchers used the Summit supercomputer at the Oak Ridge Leadership Computing Facility. They combined molecular dynamics simulations with five machine learning models in a novel way and applied quantum chemistry, finding that Mpro likely has the highest binding affinity in SARS-CoV-2 compared to the other primary coronaviruses. In previous studies, these techniques helped scientists narrow down a list of potential antiviral inhibitor drugs.

“With a set of computational approaches, we were able to predict the strongest binding spots between NEMO and Mpro,” co-first author and ORNL scientist Erica Prates said. “We think that a high binding affinity at these hot spots helps explain the high fitness of the virus in humans.”

Moving forward, the biomedical industry could use the study to help build better inhibitor drugs and understand how other proteins could be affected by Mpro, Wakatsuki said.

“NEMO is only the tip of the iceberg,” he said. “We can now study what happens when many other proteins in the body are cleaved by Mpro during infection.”