New kind of CRISPR technology to target RNA, including RNA viruses like coronavirus 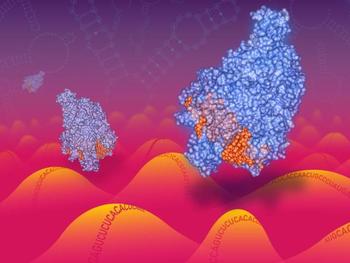 CRISPR-based genetic screens have helped scientists identify genes that are key players in sickle-cell anemia, cancer immunotherapy, lung cancer metastasis, and many other diseases. However, these genetic screens are limited in scope: They can only edit or target DNA. For many regions of the human genome, targeting DNA may not be effective, and other organisms, such as RNA viruses like coronavirus or flu, cannot be targeted at all with existing DNA-targeting CRISPR screens.

Now, in an important new resource for the scientific community published in Nature Biotechnology, researchers in the lab of Neville Sanjana, PhD, at the New York Genome Center and New York University have developed a new kind of CRISPR screen technology to target RNA.

The researchers capitalized on a recently characterized CRISPR enzyme called Cas13 that targets RNA instead of DNA. Using Cas13, they engineered an optimized platform for massively-parallel genetic screens at the RNA level in human cells. This screening technology can be used to understand many aspects of RNA regulation and to identify the function of non-coding RNAs, which are RNA molecules that are produced but do not code for proteins.

By targeting thousands of different sites in human RNA transcripts, the researchers developed a machine learning-based predictive model to expedite identification of the most effective Cas13 guide RNAs. The new technology is available to researchers through an interactive website and open-source toolbox to predict guide RNA efficiencies for custom RNA targets and provides pre-designed guide RNAs for all human protein-coding genes.

"We anticipate that RNA-targeting Cas13 enzymes will have a large impact on molecular biology and medical applications, yet little is known about guide RNA design for high targeting efficacy," said Dr. Sanjana, senior author of the study. "We set about to change that through an in-depth and systematic study to develop key principles and predictive modeling for most effective guide design."

Postdoctoral scientist Hans-Hermann Wessels and PhD student Alejandro Méndez-Mancilla, who are co-first authors of the study, developed a suite of new Cas13-based tools and conducted a transcript tiling and permutation screen in mammalian cells. In total, the researchers gathered information for more than 24,000 RNA-targeting guides.

"We tiled guide RNAs across many different transcripts, including several human genes where we could easily measure transcript knock-down via antibody staining and flow cytometry," said Dr. Wessels. "Along the way, we uncovered some interesting biological insights that may expand the application of RNA-targeting Cas13 enzymes." Among the team's findings, for example, are insights about which regions of the guide RNA are more important for recognition of a target RNA. Using thousands of guide RNAs with 1, 2 or 3 single-letter mismatches to their target RNA, they identified a critical "seed" region that is exquisitely sensitive to mismatches between the CRISPR guide and the target. This discovery will aid scientists in designing guide RNAs to avoid off-target activity on unintended target RNAs. Since a typical human cell expresses approximately 100,000 RNAs, accurate targeting of Cas13 of only the intended target is vital for screening and therapeutic applications.

In addition to furthering our understanding of Cas13 off-targets, the "seed" region could be used for next-generation biosensors that can more precisely discriminate between closely related RNA species. In total, this study increases the number of data points from previous Cas13 studies in mammalian cells by more than two orders of magnitude.

"We are particularly excited to use the optimized Cas13 screening system to target noncoding RNAs," said fellow co-first-author Méndez-Mancilla. "This greatly expands the CRISPR toolbox for forward genetic and transcriptomic screens." In the study, the researchers noticed a marked difference in protein knockdown when targeting different protein-coding and non-coding elements of messenger RNAs, and found evidence that Cas13 competes with other RNA-binding proteins involved in transcript processing and splicing.

The team recently leveraged their guide RNA predictive model for a particularly critical analysis: The COVID-19 public health emergency is due to a coronavirus, which contains an RNA - not DNA - genome. Using the model derived from their massively-parallel screens, the researchers have identified optimal guide RNAs that could be used for future detection and therapeutic applications.s