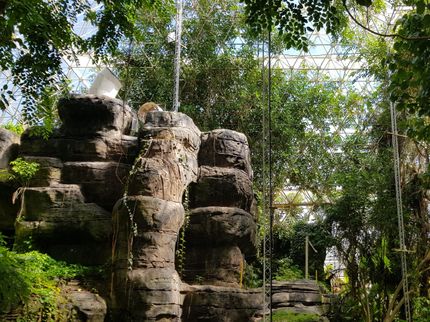 Enclosed artificial rainforest in the Biosphere 2 complex in Arizona: a research team from the Max Planck Institute for Chemistry, the University of Freiburg and the University of Arizona placed the forest under moderate and then severe drought stress for three months.

Worldwide, plants emit about 100 million tonnes of monoterpenes into the atmosphere each year. These volatile organic molecules include many fragrances such as the molecule pinene – known for its pine fresh scent. Since these molecules are highly reactive and can form tiny aerosol particles that can grow into nuclei for clouds droplets, natural emissions play an important role in our climate. Therefore, it is important for climate predictions to know how monoterpene emissions will change as temperatures rise.

As with pinene, many monoterpenes occur in two mirror-image forms: (+) alpha-pinene and (-) alpha-pinene. Plants can release both forms of these volatile molecules directly after biosynthesis or from storage pools in leaves. Because the two chiral or enantiomeric forms have identical physical and chemical properties, they are often not considered separately in atmospheric modeling. However, in a new study published in Nature, researchers from the Max Planck Institute have shown that the two mirror-image molecules are released via different processes in the plant and that they respond differently to stress, particularly drought.

Three months of drought stress in an artificial rainforest

The results come from experiments conducted at an enclosed artificial tropical rainforest within the Biosphere 2 complex, in Arizona which was originally built to create a self-sustaining ecosystems. This facility allowed a team of scientists from the Max Planck Institute for Chemistry, University of Freiburg and the University of Arizona to precisely control the chemical and climatic conditions of the forest and measure its responses. For three months, the science team put the forest under moderate and then severe drought stress.
Using gas chromatographs, Joseph Byron a PhD student on the project from the Max Planck Graduate School, determined hourly emissions of alpha-pinene, camphene, limonene, terpinene and isoprene. To determine when the plants emitted which chiral form, the researchers used isotopically labelled CO2 to track photosynthentic carbonand introduced “heavy” carbon dioxide (13CO2) to the air of the biosphere at certain times. Using a mass spectrometer coupled to the chromatograph, the team could  then track which monoterpenes contained heavy carbon atoms and which did not. This revealed which labelled compounds were being made and released instantaneously by the ecosystem and which unlabeled species were coming from storage pools.

"To our surprise, many mirror molecules behaved differently under drought stress," comments the papers first author Joseph Byron "Thus, (-) alpha-pinene was labeled, whereas (+) alpha-pinene, which we measured simultaneously, was not." This means that the tropical rainforest ecosystem released (-) alpha-pinene directly after synthesis, while the mirror molecule comes from storage pools in the plant.

In addition, the researchers found that as the drought progressed, not only were more monoterpenes released, but also the maximum in emissions shifted to later in the afternoon, and the plants released more monoterpenes from storage pools. And there may be a reason for this, suspects project leader and atmospheric scientist Jonathan Williams: "We suspect that the later release of monoterpenes increases the likelihood that clouds will form over the forest. The warmer it gets during the day, the more the vertical mixing of the air increases, allowing the reactive volatiles to reach higher layers of air where they have a greater chance to become aerosol particles and eventually cloud condensation nuclei."

Max Planck researcher Williams concludes from the Biosphere 2 studies, "To predict ecosystem responses to stress accurately, we should measure and model emissions from chiral molecules separately in the future. This is especially important for the Amazon rainforest, for which climate models predict more droughts in the future." The group leader from the Max Planck Institute for Chemistry in Mainz adds, "I am fascinated by the fact that we can decipher internal, enzyme-driven physiological processes of the forest by measuring air composition. This will certainly help us elucidate effects we've observed in the real rainforest as well." Williams' team has also been conducting research in the Brazilian rainforest at the Amazon Tall Tower Observatory ATTO.