Ions and Rydberg-atoms: a bond between David and Goliath 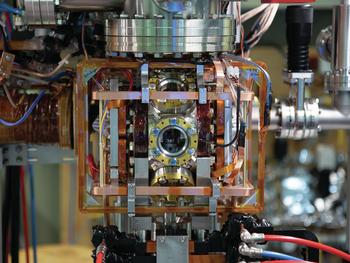 Vacuum chamber. The electric field control and the first lens of the ion microscope are sitting in the center of the chamber.

Researchers of the University of Stuttgart have verified a novel binding mechanism forming a molecule between a tiny charged particle and in atomic measures gigantic Rydberg atom. The scientists could observe spatially resolved the molecule with the help of a self-build ion microscope. The well-known journal “Nature” published the results on May 18, 2022.

When single particles like atoms and ions bond, molecules emerge. Such bonds between to particles can arise if they have for example opposite electrical charges and hence attract each other. The molecule observed at the University of Stuttgart exhibits a special feature: It consists of a positive electrically charged ion and a neutral atom in a so-called Rydberg state. These Rydberg atoms have grown in size a thousand times compared to typical atoms. As the charge of the ion deforms the Rydberg atom in a very specific way, the bond between the two particles emerges.

Rubidium cloud cooled down close to the absolute zero

To verify and study the molecule, the researchers prepared an ultra-cold rubidium cloud, which was cooled down close to the absolute zero at -273°C. Only at these low temperatures, the force between the particles is strong enough to form a molecule. In these ultra-cold atomic ensembles, the ionization of single atoms with laser fields prepares the first building block of the molecule – the ion. Additional laser beams excite a second atom into the Rydberg state. The electric field of the ion deforms this gigantic atom. Interestingly the deformation can be attractive or repulsive depending on the distance between the two particles, letting the binding partners oscillate around an equilibrium distance and inducing the molecular bond. The distance between the binding partners is unusually large and amounts to about the tenth of the thickness of a human hair.

Microscopy with the aid of electric fields

A special ion microscope made this observation possible. It was developed, build and commissioned by the researches at the 5th Physical Institute in close collaboration with the workshops of the University Stuttgart. In contrast to typical microscopes working with light, the device influences the dynamics of charged particles with the help of electrical fields to magnify and image the particles onto a detector. “We could image the free floating molecule and its constituents with this microscope and directly observe and study the alignment of this molecule in our experiment”, explains Nicolas Zuber, PhD student at the 5th Physical Institute, the results.