Luciferin synthesis and organophosphate detection by a luminescent enzymatic cascade 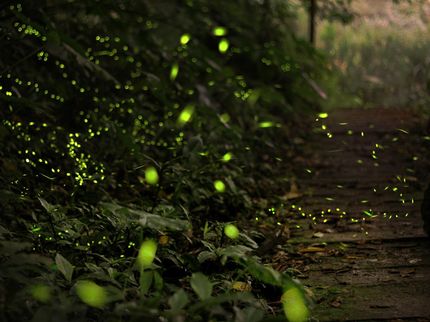 A luminescence reaction modeled on fireflies can detect contamination with organophosphates with high sensitivity, ease, and low cost. At the center of this technology is a new enzymatic method for the synthesis of analogues of luciferin, the substance that makes fireflies glow. As reported by a team of researchers in the journal Angewandte Chemie, it could also be used in the field.

The widespread use of toxic organophosphate pesticides (OPs) is a very serious global environmental and health problem. Among the concerns are acute, often fatal poisoning cases in agriculture—particularly in developing nations—and also toxic pesticide residues that accumulate in food chains and freshwater reservoirs where they may instigate cancer, Alzheimer’s, and diabetes, for example. In the EU and USA, OPs are strictly regulated.

Conventional detection by chromatography/mass spectrometry is complex, expensive, and not suitable for use in poor countries or in remote areas. Test kits are usually not sensitive and are unreliable. A team from Thailand and Japan has now developed an inexpensive, simple test that detects OPs directly in foods and biological samples with high specificity and extreme sensitivity without sample preparation.

The researchers led by Pimchai Chaiyen started with a new enzymatic cascade reaction for the synthesis of luciferin analogues from phenolic compounds, which they called the HELP reaction. Luciferin is the substrate of the enzyme luciferase and causes fireflies to glow. Bioluminescence catalyzed by luciferase is an important method used in biochemical research and the analysis of toxicants. HELP makes it possible to produce luciferin analogues much more easily than before, without special expertise or toxic chemicals. Luciferin analogues produce luminescence in different wavelengths and allow for the parallel detection of different target molecules. Among others, the team produced two previously unknown luciferin analogues. One of these produces brighter light of a longer wavelength than the original, which penetrates cells and tissues more efficiently. This facilitates real-time imaging and helps to reduce the need for animal experiments.

The new method for detecting organophosphates is also based on HELP. “LUMOS” (Luminescence Measurement of Organophosphate and Derivatives) includes three reaction steps. First, an enzyme from soil bacteria breaks down the OPs and/or their metabolites into phenol derivatives. In the second step, these are converted into a luciferin analogue via the HELP reaction. In the third step, the luciferin derivative is used to produce a bioluminescence signal with firefly luciferase. The wavelength can be used to differentiate between different OPs. The team was able to detect five particularly toxic OPs, such as parathion (E605), in concentrations of parts per trillion (ppt) in urine, blood serum, and fruit, and without sample preparation.