Which animals exist right here? Now researchers are able to find the answer out of thin air 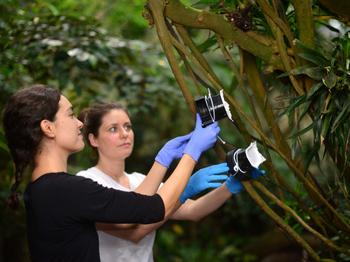 Christina Lynggaard and Kristine Bohmann in the Rainforest House

Identifying the animal species that live in a particular area can be a lot of work. Usually it means spotting the animals with the naked eye or recording them using a camera trap. Their presence can also be identified via the traces they leave on the ground or in the form of e.g. faeces. Common to all these methods, however, is that they are time-consuming.

Researchers from the University of Copenhagen and the Queen Mary University of London now appear to have found a solution to that problem. In two new parallel studies, they have shown that DNA from the air can help identify the animals that are present in a given area. They use a so-called DNA vacuum.

The Danish research team have tested the new method in the Copenhagen Zoo, where they have filtered the air in the okapi stables, the rainforest hall and outside around the enclosures.

“We were amazed by the results. By vacuuming DNA from the air, we were able to identify 49 animal species, including mammals, birds, frogs, reptiles and fish. In the rainforest hall, we even found traces of the sloth, the boa and the guppies that live in a small pond. Outside we identified a lot of the animals that have access to outdoor spaces in this section of the park, including ostrich, guinea fowl, giraffe, zebra, impala, okapi and rhinoceros,” explains Associate Professor Kristine Bohmann from the GLOBE Institute at the University of Copenhagen, who is head of the Danish study.

The Danish research team tested different methods for filtering animal DNA from the air: a so-called water vacuum, where DNA from the air is sucked into water, and a fan like the ones used to cool computers. The latter sucked the air into a filter, which then identified the DNA. The researchers tested two versions of the fan, the smallest of which was no larger than a golf ball. Using these three ‘vacuums’, the Danish research team collected a total of 40 air samples from the Copenhagen Zoo.

Most, but not all of the animal species identified by the researchers via airborne DNA live in captivity in the Zoo. The researchers also identified DNA from species that live outside the Zoo, including dog, cat, water vole, yellow-necked mouse, rat and red squirrel. They even registered three species of fish fed to the animals in the Zoo.

“It is difficult to work with air, because air touches everything. This means that the risk of getting polluted samples was significant. And we wanted to make sure the species we identified actually came from the Zoo and not from our own laboratory. Therefore, we used a set of extremely strict environmental DNA methods. We even took samples from the air in the lab to make sure that it did not contain any animal DNA,” says Postdoc Christina Lynggaard from the GLOBE Institute.

May revolutionise our ability to map biodiversity

Concurrently with the Danish research team, a group of British researchers at the Queen Mary University of London conducted a similar study in the Hamerton Zoo Park. They used a third method to collect more than 70 air samples from different parts of the park. Here they found DNA from 25 different animal species, 17 of which lived in the park, while the rest were wild animals from the surrounding area, including e.g. hedgehog, which in the UK is an endangered species. The two studies’ independent demonstration of airborne DNA for animal monitoring supports the potential of the method.

Animals leave DNA traces in their environment, and especially environmental DNA in water is a popular method for mapping species in aquatic environments. The two research teams now hope that airborne DNA will develop into its counterpart on dry land and, supported by more research, a strong tool for mapping the animals present in a given area.

“The loss of biodiversity globally means that we need new methods for monitoring animal species. Airborne environmental DNA has the potential to revolutionise our ability to map biodiversity on dry land and to monitor the composition of animal populations. It also enables us to keep an eye on invasive species and to record the presence of species in areas that are difficult to access, e.g. caves and caverns,” says Assistant Professor Elizabeth Clare from York University, formerly the Queen Mary University of London.

“I have to admit that I did not think we would succeed – and definitely not to this extent. Even though more research is required before we can utilise the full potential of airborne DNA, we believe it can change our ability to map the presence of animals completely, and that it will give us valuable knowledge in connection with e.g. the protection and preservation of biodiversity,” says Kristine Bohmann.