New therapies on the horizon 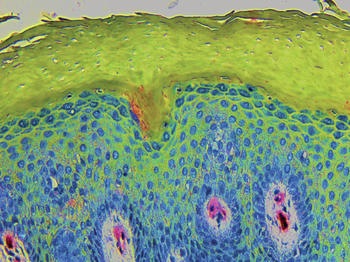 In a genome-wide association study, an MDC research group led by Young-Ae Lee discovered several rare gene variants that increase susceptibility to eczema. The team has now published its findings in Nature Communications.

Up to 20 percent of children and three percent of adults worldwide suffer from the chronic inflammatory skin disease eczema, also known as atopic dermatitis. Typical symptoms are dry, inflamed and very itchy patches of skin on the inside of the elbows or on the back of the knees – but eczema can occur all over the body. The condition is often triggered by exposure to allergens, which leads to an overactive immune response and an inflammatory reaction in the skin. Eczema belongs to the group of allergic diseases that include asthma, hay fever and food allergies.

Researchers estimate from family and twin studies that two-thirds of eczema susceptibility is due to hereditary factors whereas environmental factors account for one-third of the disease risk. “Previous studies have identified 32 gene loci associated with eczema,” says Professor Young-Ae Lee of the Max Delbrück Center for Molecular Medicine in the Helmholtz Association (MDC). Yet these explained only around 15 percent of the disease’s heritability. Until recently, genome-wide association studies have only been able to analyze genetic variants with a population frequency of at least 5 percent. “Our study was the first to investigate the role of rare variants in eczema,” says Lee. Recent studies suggested that rare genetic variants play a significant role in a number of common diseases – such as inflammatory bowel disease, asthma and cancer. Lee and her colleagues in the MDC research group Molecular Genetics of Chronic Inflammation and Allergic Disease have now described eleven rare variants associated with eczema in the scientific journal Nature Communications.

The larger the study, the greater the chance of finding rare gene variants

The DNA sequence of two people differs approximately every 1,000 base pairs. These single nucleotide polymorphisms (SNPs) are randomly distributed throughout the entire genome and account for people’s genetic individuality – and therefore also for their susceptibility to certain diseases. Genetic association studies search for variants with a significant difference in frequency between, in this case, eczema patients and healthy individuals. To detect rare variants, large study populations are required. For this study, research groups around the world contributed data from a total of 20,016 eczema patients and 380,433 control subjects.

The most common genotyping method uses DNA microarrays – chips that contain DNA fragments of up to several million SNPs. While microarrays were designed to genotype common variants, a mathematical trick allows researchers to find rare variants as well. “SNPs that are located close together on the DNA strand tend to be inherited jointly,” explains Dr. Ingo Marenholz, one of the study’s lead authors. “We use this knowledge to predict SNPs that are not included in the genotyping array with a certain probability.” This statistical procedure, known as imputation, uses reference data sets to extract additional information from existing data sets. The team was the first to conduct an association study on eczema using the Haplotype Reference Consortium data set, which contains the complete genome sequences of more than 32,000 individuals and thus allows for the reliable imputation of even rare variants.

“Using this method, we discovered eleven new variants with a frequency of less than five percent in the population,” Marenholz reports. “We estimate that rare variants account for over 20 percent of the disease risk provided by all variants under study.” Some of the identified variants are located in gene regions that code for proteins. Here, they cause an amino acid change that alters the protein sequence. These variants, the scientist explains, would be good candidates for subsequent functional studies. The protein-coding genes in question were identified as DUSP1, NOTCH4 and SLC9A4, and the proteins encoded by DUSP1 and NOTCH4 were detected in skin.

DUSP1 is involved in the deactivation of anti-inflammatory enzymes. The researchers modeled the amino acid changes in this protein and found that one occurs at the site of the molecule where the target proteins bind, and another near the active site. Further studies will show whether the variants affect the regulation of inflammatory reactions in the skin.

New therapies on the horizon

Atopic dermatitis is usually the first allergic disease in infancy – and can be the first step in the so-called “atopic march.” Eczema increases the risk of developing asthma, hay fever and/or food allergy later in life, paving the way for a lifetime as an allergy sufferer. “If we had better control over atopic dermatitis, we may also be able to reduce other allergic diseases,” says Marenholz. Eczema is not yet curable, but treatment is most effective when started as early as possible. Researchers are currently investigating whether the early and consistent treatment of eczema can interrupt the atopic march.

Marenholz is optimistic: “The strength of genome-wide studies lies in the ability to uncover previously unknown disease mechanisms – and these could become promising targets for new therapeutic approaches.” Currently, eczema is usually treated by topical application of anti-inflammatory agents to the skin. In severe cases, a systemic therapy with immunomodulators is the therapy of choice.