Researchers develop polymer coating that enables low surface tension liquids to be transported over distances 15 times longer than currently possible, without losing any of the liquid 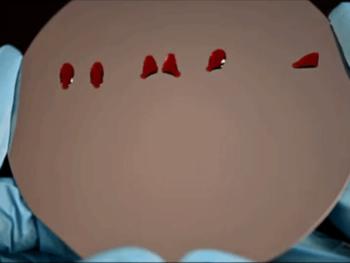 New polymer coatings, developed by Professor Kevin Golovin and his team at the University of Toronto, show the precision with which liquids can move across surfaces.

A newly developed coating that allows for certain liquids to move across surfaces without fluid loss could usher in new advances in a range of fields, including medical testing.

“Nature has already developed strategies to transport liquids across surfaces in order to survive,” says Mohammad Soltani, researcher in the DREAM Laboratory and lead author of a new paper recently published in Advanced Functional Materials.

“We were inspired by the structural model of natural materials such as cactus leaves or spider silk. Our new technology can directionally transport not only water droplets, but also low surface tension liquids that easily spread on most surfaces.”

The innovation has important implications for microfluidics, a field where small quantities of liquids are transported within tiny channels, often less than a millimetre wide. This technique has many applications, one of them being to miniaturize the standard analytical tests that are currently preformed in chemical laboratories.

By reducing the quantity of sample and reagents required, and automating protocols for working with them, microfluidics can power lab-on-a-chip devices that offer fast, inexpensive medical tests. Proponents hope this could lead to diagnosing multiple conditions in minutes using only a drop or two of blood.

But current microfluidic devices have a key limitation: they can only effectively handle liquids with high surface tension, such as water. This property, also known as cohesion, means that the liquid has a greater tendency to stick to itself than to the sides of the channel it is being transported through.

High surface tension liquids form discrete droplets that can be moved around independently, like raindrops on window glass. Cohesion can even be exploited to pull the liquid droplets along the channel through a process known as capillary action.

By contrast, low surface tension liquids, such as alcohols and other solvents, tend to stick to the sides of the channels, and can currently be transported for only about 10 millimetres before the droplet disintegrates. Capillary action no longer applies, so this transport requires an external force, such as magnetism or heat, to move the droplets.

The new coating enables low surface tension liquids to be transported over distances of over 150 millimetres without losing any of the liquid, about 15 times longer than currently possible.

The technology uses two newly developed polymer coatings, one of which is more liquid-repellent than the other. Both are composed of liquid-like polymer brushes. The more repellent coating acts as a background, surrounding the less repellent coating and creating tiny channels along the surface. The channels allow for the liquids to move in a desired pattern or direction without losing any of the liquid during transport or requiring additional energy input.

“Polymer brush coatings reduce the fluid friction and allow the droplets to be transported passively,” says Soltani, “Less friction means more energy is available to transport the liquid. We then create a driving force by designing the channels with specific patterns.”

The ability to transport low surface tension liquids without loss will allow for advancements in lab-on-a-chip devices. Using these unique coatings, researchers have the ability to transport liquids over a longer range, move multiple liquids at the same time along a precise pathway and even merge and split droplets — all without losing any volume or experiencing cross-contamination.

This technology will also help limit waste in research labs. With no residue left behind on the surface of the device and therefore no risk of cross-contamination, researchers can use the same devices over and over again.

“We’re looking at using this technology for microfluidics bioassays, as this is an area where every drop of liquid is precious,” says Golovin. “Our findings also have great potential to advance point-of-care diagnostics, such as liver or kidney disease, where biological marker screening is often performed in non-aqueous media.”