Tracking the NO signaling pathway 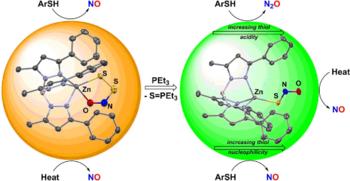 Both nitric oxide (NO) and hydrogen sulfide (H2S) act as gaseous signaling molecules with similar physiological effects. Many of the critical questions about the interplay between these two gasotransmitters hinge on their chemical reactivity and the fleeting existence of HSNO, a key product of the reaction between them. A team of researchers has been able to stabilize, isolate, and characterize two of the species tied to these signaling pathways through binding to a zinc complex, as reported in the journal, Angewandte Chemie.

NO is a central signaling molecule in biology that regulates many physiological functions that include vascular dilation, transmission of nerve impulses, and cell protection. Interestingly, H2S exhibits similar effects, relaxing smooth muscle cells involved in vasodilation. HSNO may thus play a key role in the overlap of these signaling pathways. This extremely reactive species is so unstable, however, that its biochemistry and discrete reaction pathways are very difficult to determine. HSNO passes readily through cell membranes and can nitrosylate proteins, transferring its nitrosyl group (–N=O) to other residues, especially cysteine, which represents an important step in a number of cellular regulation mechanisms. At biological pH, HSNO likely exists as the thionitrite anion SNO− that is unstable towards conversion to the perthionitrite anion SSNO−.

Graduate student Valiallah Hosseininasab in the team led by Timothy H. Warren at Georgetown University (Washington, D.C., USA) stabilized the SNO− and SSNO− anions through binding to a special zinc complex inspired by a common environment for zinc in biology. Zinc is a physiologically important metal that is involved in myriad processes that include the regulation of blood pH through the enzyme carbonic anhydrase. Moreover, molecules involved in nitric oxide signaling, such as H2S and S-nitrosothiols (molecules with an –S–N=O group), readily react with zinc–sulfur bonds that form important structural units whose modification in proteins leads to functional change.

The Georgetown team revealed that zinc complexes containing the SNO− and SSNO− anions could be isolated and characterized. Investigation of their reactivity patterns showed interesting differences in their reactions with thiols (substances with a sulfide group, –SH), ubiquitous antioxidants that help protect cells from damage. While reactions with perthionitrite form NO, thionitrite forms either dinitrogen oxide (laughing gas) N2O or S-nitrosothiols, which represent ready reservoirs of NO. These results suggest that the smallest differences in the course of physiological signaling pathways can lead to different output signals that ultimately result from the interplay between NO and H2S.