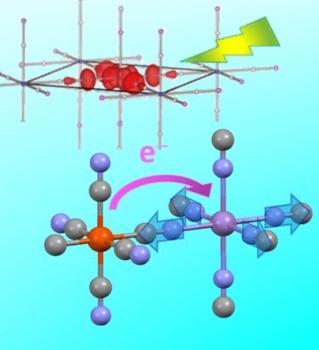 Prussian blue is an intensely blue inorganic pigment that is used in paintings, dyeing, and medicine, among others. The crystal lattice of this K[FeIIFeIII(CN)6] complex contains alternating divalent and trivalent iron atoms. The intense color results from a charge transfer: when irradiated by light, electrons are transferred from the FeII to the FeIII. Even though this pigment is not used to dye textiles today, its special electronic properties make Prussian blue an interesting candidate for other applications, including windowpanes with self-adjusting translucency, optoelectronic components, gas absorption, and catalysis. It could also serve as a material for electrodes in novel energy storage devices.

Over the years, equally interesting compounds that contain other metals but have analogous structures have been produced, such as RbMnFe, which is a Prussian blue analogue in which manganese replaces some of the iron ions. At low temperatures, the lattice consists of trivalent manganese and divalent iron ions. The manganese is surrounded in an octahedral pattern by the nitrogen atoms of the cyanide ligands, while the iron is surrounded by an octahedron made of the cyanide carbon atoms. Under light, charge transfer occurs similarly to Prussian blue: MnIIIFeII → MnIIFeIII. The process is local and ultrafast.

Studying such a fast process is a challenge. A team lead by Hiroko Tokoro (University of Tsukuba, Japan), Shin-ichi Ohkoshi (The University of Tokyo, Japan), and Eric Collet (University of Rennes 1, France) has met this challenge by using an ultrafast optical spectroscopy technique called pump probe spectroscopy, which has a resolution of 80 femtoseconds (80 quadrillionths of a second). In this method, the electrons in the compound are shifted to a higher energy state through excitement with a laser pulse. After a short time, the system is irradiated with a second laser pulse at a different wavelength and the absorption is measured. Combination of the results from these experiments with calculations of the electronic band structures showed that there are two different photoswitching pathways for charge transfer. They have different dynamics that result from very different types of initial electronic excitation.

The primary pathway (MnIII(d-d)-pathway) begins when light excites an electron in a d orbital on one MnIII into another, somewhat higher energy d orbital on the same MnIII. This leads to a loosening and lengthening of the bond between the MnIII and some of the neighboring nitrogen atoms. This causes compression of the octahedron around the manganese (inverse Jahn-Teller distortion), which leads to local distortion of the lattice and coherent vibrations. This is the driving force for transfer of an electron (charge transfer) from iron to manganese (MnIIIFeII → MnIIFeIII). The time scale for this process is under 200 femtoseconds.

In addition, another intervalence transfer pathway also plays a role. In this process, an electron from the iron is excited by light and lifted directly into an orbital on the manganese. The slower reorganization causes no coherent lattice vibration.