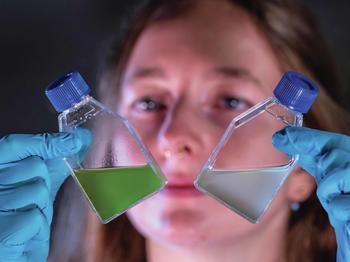 Green algae almost completely lose their colour when the deadly bacteria have been added to them.

University of Jena researchers have discovered a bacterial toxin that destroys the colour pigments in the eyespot of the single-cell green alga Chlamydomonas reinhardtii. Together with another toxic substance, the bacteria of the species Pseudomonas protegens not only disorientate and immobilise the green algae, but condemn them to a certain death. The researchers detected the toxin, called “protegencin”, with the help of Raman spectroscopy and natural product research.

“The green algae have a primitive eye, called  the eyespot, with which they perceive light and can orientate themselves,” explains Maria Mittag. This enables the single-cell organisms, measuring around 10 micrometres, to move towards the light, in order to have optimum conditions for photosynthesis. The eyespot contains two layers of yellowish carotenoid-rich fat droplets.
“The eyespot carotenoids can be studied  by using Raman spectroscopy,” adds Prof. Mittag. This method analyses the scattering of laser light on molecules and provides a characteristic spectrum, comparable to a spectroscopic “fingerprint”.

With this instrument, the researchers, together with Prof. Popp’s team, set about their detective work and analysed the “Raman fingerprints” from algal cultures to which Pseudomonas bacteria had been added.

“You can see the effect just with the naked eye,” reports Vivien Hotter. The green algal culture loses its colour almost completely overnight. “In parallel, the Raman signal for the eyespot carotenoids decreases.” This suggests that the algae lose their ability to orientate themselves in light, says Vivien Hotter. But that is not all: “We were also able to show that the toxin dissolves their cell membrane. The algae don’t survive that.”

The researchers, in cooperation with their colleagues in the “ChemBioSys” Collaborative Research Centre, tracked down the “murder weapon” that enables the bacteria to kill the algae. The analysis of the Raman spectra showed that not only does the signal for the eyespot pigments decrease in the course of the bacterial attack, but that a new signal not previously present also appears in the spectrum. Prof. Hertweck’s team of natural product researchers used this signal to decipher the basic chemical structure of the bacterial toxin. Together with the other researchers, they ultimately succeeded in identifying the substance “protegencin” as the cause of death.

With their basic research, the scientists in “ChemBioSys” are looking for natural substances that influence the interaction between biosystems such as microalgae and bacteria, with the aim of clarifying the underlying control mechanisms. Although microalgae contribute significantly to global oxygen production and, together with cyanobacteria, fix around 50 percent of the greenhouse gas carbon dioxide, the fundamental control mechanisms in the complex biosystems of algae and bacteria are not yet sufficiently well understood.