The Mechanics of the Immune System 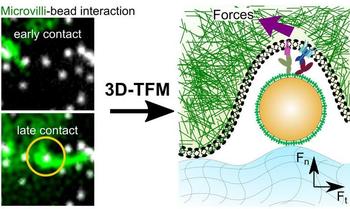 When T-cells of our immune system become active, tiny traction forces at the molecular level play an important role. They have now been studied at TU Wien.

Highly complicated processes constantly take place in our body to keep pathogens in check: The T-cells of our immune system are busy searching for antigens - suspicious molecules that fit exactly into certain receptors of the T-cells like a key into a lock. This activates the T-cell and the defense mechanisms of the immune system are set in motion.

How this process takes place at the molecular level is not yet well understood. What is now clear, however, is that not only chemistry plays a role in the docking of antigens to the T-cell; micromechanical effects are important too. Submicrometer structures on the cell surface act like microscopic tension springs. Tiny forces that occur as a result are likely to be of great importance for the recognition of antigens. At TU Wien, it has now been possible to observe these forces directly using highly developed microscopy methods.

This was made possible by a cooperation between TU Wien, Humbold Universität Berlin, ETH Zurich and MedUni Vienna.

As far as physics is concerned, our human sensory organs work in completely different ways. We can smell, i.e. detect substances chemically, and we can touch, i.e. classify objects by the mechanical resistance they present to us. It is similar with T cells: they can recognize the specific structure of certain molecules, but they can also "feel" antigens in a mechanical way.

"T cells have so-called microvilli, which are tiny structures that look like little hairs," says Prof. Gerhard Schütz, head of the biophysics working group at the Institute of Applied Physics at TU Wien. As the experiments showed, remarkable effects can occur when these microvilli come into contact with an object: The microvilli can encompass the object, similar to a curved finger holding a pencil. They can then even enlarge, so that the finger-like protrusion eventually becomes an elongated cylinder, which is turned over the object.

"Tiny forces occur in the process, on the order of less than a nanonewton," says Gerhard Schütz. One nanonewton corresponds roughly to the weight force that a water droplet with a diameter of one-twentieth of a millimeter would exert.

Force measurement in the hydrogel

Measuring such tiny forces is a challenge. "We succeed by placing the cell together with tiny test beads in a specially developed gel. The beads carry molecules on their surface to which the T cell reacts," explains Gerhard Schütz. "If we know the resistance that our gel exerts on the beads and measure exactly how far the beads move in the immediate vicinity of the T-cell, we can calculate the force that acts between the T-cell and the beads."

These tiny forces and the behavior of the microvilli are likely to be important in recognizing the molecules and thus triggering an immune response. "We know that biomolecules such as proteins show different behavior when they are deformed by mechanical forces or when bonds are simply pulled," says Gerhard Schütz. "Such mechanisms are also likely to play a role in antigen recognition, and with our measurement methods this can now be studied in detail for the first time."