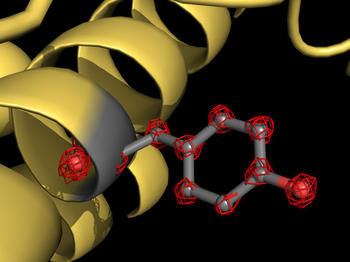 Cryo-EM visualizes individual atoms in a protein for the first time. The cartoon shows a part of the apoferritin protein (yellow) with a tyrosine side chain highlighted in grey. Atoms are individually recognizable (red grid structures).

A crucial resolution barrier in cryo-electron microscopy has been broken. Holger Stark and his team at the Max Planck Institute (MPI) for Biophysical Chemistry have observed single atoms in a protein structure for the first time and taken the sharpest images ever with this method. Such unprecedented details are essential to understand how proteins perform their work in the living cell or cause diseases. The technique can in future also be used to develop active compounds for new drugs.

Since the outbreak of the COVID-19 pandemic, scientists around the world have been solving 3D structures of important key proteins of the novel coronavirus. Their common goal is to find docking sites for an active compound which can combat the pathogen effectively.

One method applied for that is cryo electron microscopy (cryo-EM), which can be used to make three-dimensional structures of biomolecules visible. As these are structurally highly flexible this is no easy task. To capture the fuzzy molecules without damaging them, they are cooled down extremely quickly, or shock-frozen so to speak. The frozen samples are thereafter bombarded with electrons, and the resulting images are recorded. Using these, the three-dimensional structure of the molecules can then be calculated. Three pioneers of this technique, Jacques Dubochet, Joachim Frank, and Richard Henderson, received the Nobel Prize in Chemistry for the development of cryo-EM in 2017.

Stark's group has now broken the cryo-EM resolution barrier with a unique cryo-electron microscope newly developed by this team. “We equipped our device with two additional electron-optical elements to further improve image quality and resolution. These ensure that imaging errors of optical lenses, so-called aberrations, no longer play a role,” explains the Max Planck director. His doctoral student Ka Man Yip adds: “Electron microscopes are optical instruments and physically resemble a camera. The aberrations of an electron microscope interfere in cryo-EM in much the same way as those of a camera in photography. For a much improved image quality it was therefore crucial to avoid these aberration errors.”

Using the new microscope, the scientists have taken more than one million images of the protein apoferritin to map the molecular structure with a resolution of 1.25 angstroms. One angstrom is equivalent to a ten millionth of a millimeter. “We now visualize single atoms in the protein – a milestone in our field,” explains structural biologist Stark. “For us, it was like putting super glasses on the microscope. The new structure reveals details never seen before: We can even see the density for hydrogen atoms and single atom chemical modifications.”

The great potential of cryo-EM for imaging of high-resolution 3D protein structures was also demonstrated by colleagues at the Medical Research Council Laboratory of Molecular Biology in Cambridge (UK). They achieved a similarly high resolution using a different approach. “It is now conceivable that cryo-EM will in future be able to achieve even subatomic resolutions,” says the Max Planck researcher.

But what is the benefit of being able to study a protein structure with such unprecedented atomic resolution? To understand how a man-made machine works, one has to observe its components directly at work. This is also true for proteins – the nanomachines of living cells. To get an idea how they carry out their tasks, one has to know the exact position of all atoms of the protein.

Such detailed insights are also relevant for structure-based drug design. Compounds for drugs are customized in a way that they bind to viral proteins, for example, and block their function. But what is the underlying mechanism of inhibition? Researchers can only elucidate and understand this if they can observe at atomic level how a compound and a viral protein interact. Such novel insights help to improve molecules for drugs and reduce side effects. “With breaking this cryo-EM resolution barrier, the technique has reached a level where the benefits for pharmaceutical developments are directly visible,” says Stark.