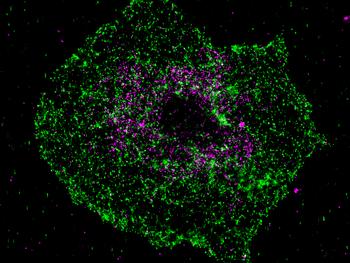 The previously largely unknown molecule bridging integrator 2 (BIN2) plays a central role in platelet activation, as researchers from Würzburg have now shown in a joint project of the DFG Collaborative Research Centre/Transregio 240. This finding provides indications of starting points for drug development against thrombosis, heart attack and stroke and was published in the journal The Journal of Clinical Investigation.

Calcium is an important signaling molecule in virtually all cells. Platelets are activated by calcium and subsequently contribute to hemostasis and wound sealing. However, a misguided activation of blood platelets by uncontrolled calcium signals can also lead to acutely life-threatening events such as thrombosis, heart attacks and strokes, and trigger inflammatory reactions in the blood vessels.

Up to now, the molecule stromal interaction molecule 1 (STIM1) has been known as an essential component in the regulation of calcium signals. However, it has this function in many cells of the body and therefore a loss of STIM1 has strong effects such as weakening the immune system. For this reason, it is not suitable as a target structure for drug development.

"In our study, we were able to identify the previously unknown molecule BIN2 as a new interaction partner of STIM1 in platelets and also show that BIN2 also interacts with another component of the calcium machinery," explains Prof. Dr. Bernhard Nieswandt from the Rudolf Virchow Center at the University of Würzburg. The special thing about BIN2 is that it occurs quite specifically in platelets and not, like STIM1, in many other cells. "This enables us to target the platelets precisely, without disrupting the function of other cells," adds PhD student Julia Volz, who had a key role in the study.

The discovery was made possible by the collaboration of several research groups from the Collaborative Research Center Transregio 240, the University of Würzburg and the University Hospital of Würzburg and their wide range of methods. "Using super high-resolution fluorescence microscopy, we were able to show that the molecules STIM1 and BIN2 in the platelet colocalize at certain intervals, thereby substantiating the biochemical data," explains PhD student Charly Kusch, who also played a major role in the work.

Mice without BIN2 are protected from severe courses of the stroke

Mice that do not have BIN2 show significantly reduced calcium signals in the platelets. This leads to smaller blood clots in their blood vessels after damage to the vessel wall, the animals are partially protected against arterial thrombosis and strokes have a milder course. This shows that molecules like BIN2 could be a starting point for drug development against thrombosis, heart attack and stroke. To this end, the exact molecular mechanisms and other interaction partners must now be investigated.