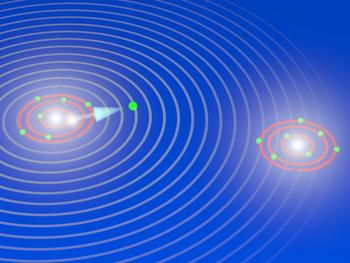 During the explosion of an oxygen molecule: the X-ray laser XFEL knocks electrons out of the two atoms of the oxygen molecule and initiates its breakup. During the fragmentation, the X-ray laser releases another electron out of an inner shell from one of the two oxygen atoms that are now charged (ions). The electron has particle and wave characteristics, and the waves are scattered by the other oxygen ion. The diffraction pattern are used to image the breakup of the oxygen molecules and to take snapshots of the fragmentation process (electron diffraction imaging).

For more than 200 years, we have been using X-rays to look inside matter, and progressing to ever smaller structures – from crystals to nanoparticles. Now, within the framework of a larger international collaboration on the X-ray laser European XFEL in Schenefeld near Hamburg, physicists at Goethe University have achieved a qualitative leap forward: using a new experimental technique, they have been able to “X-ray” molecules such as oxygen and view their motion in the microcosm for the first time.

“The smaller the particle, the bigger the hammer.” This rule from particle physics, which looks inside the interior of atomic nuclei using gigantic accelerators, also applies to this research. In order to “X-ray” a two-atom molecule such as oxygen, an extremely powerful and ultra-short X-ray pulse is required. This was provided by the European XFEL which started operations in 2017 and is one of the the strongest X-ray source in the world

In order to expose individual molecules, a new X-ray technique is also needed: with the aid of the extremely powerful laser pulse the molecule is quickly robbed of two firmly bound electrons. This leads to the creation of two positively charged ions that fly apart from each other abruptly due to the electrical repulsion. Simultaneously, the fact that electrons also behave like waves is used to advantage. “You can think of it like a sonar,” explains project manager Professor Till Jahnke from the Institute for Nuclear Physics. “The electron wave is scattered by the molecular structure during the explosion, and we recorded the resulting diffraction pattern. We were therefore able to essentially X-ray the molecule from within, and observe it in several steps during its break-up.”

For this technique, known as “electron diffraction imaging”, physicists at the Institute for Nuclear Physics spent several years further developing the COLTRIMS technique, which was conceived there (and is often referred to as a “reaction microscope”). Under the supervision of Dr Markus Schöffler, a corresponding apparatus was modified for the requirements of the European XFEL in advance, and designed and realised in the course of a doctoral thesis by Gregor Kastirke. No simple task, as Till Jahnke observes: “If I had to design a spaceship in order to safely fly to the moon and back, I would definitely want Gregor in my team. I am very impressed by what he accomplished here.”

The result, which was published in the current issue of the Physical Review X, provides the first evidence that this experimental method works. In the future, photochemical reactions of individual molecules can be studied using these images with their high temporal resolution. For example, it should be possible to observe the reaction of a medium-sized molecule to UV rays in real time. In addition, these are the first measurement results to be published since the start of operations of the Small Quantum Systems (SQS) experiment station at the European XFEL at the end of 2018.