Researchers watch work of an enzyme in unprecedented detail 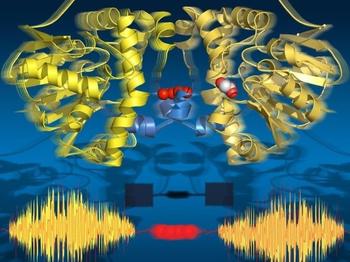 Time-resolved serial synchrotron crystallography captures all key states of catalysis while revealing allosteric transmission pathway between the two subunits of the enzyme.

Researchers from the Department of Atomically Resolved Dynamics of the Max Planck Institute for the Structure and Dynamics of Matter (MPSD) at the Center for Free-Electron Laser Science in Hamburg, the University of Potsdam (both in Germany) and the University of Toronto (Canada) have pieced together a detailed time-lapse movie revealing all the major steps during the catalytic cycle of an enzyme. Their findings have just been published in Science. Surprisingly, the communication between the protein units is accomplished via a water-network akin to a string telephone. This communication is aligned with a ‘breathing’ motion, that is the expansion and contraction of the protein. This time-lapse sequence of structures reveals dynamic motions as a fundamental element in the molecular foundations of biology.

All life is dynamic and so are its molecular building blocks. The motions and structural changes of biomolecules are fundamental to their functions. However, understanding these dynamic motions at a molecular level is a formidable challenge. How is a protein able to accelerate a chemical reaction, which would take years to proceed without help?

To this end the researchers turned to an enzyme that splits the strongest single-bond in organic chemistry: the C-F bond. Fluorinated carbons can be found in materials such as Teflon or GoreTex and in many pharmaceuticals and pesticides. Fluorinated compounds have a particular influence in climate change, exceeding the effectiveness of CO2 by orders of magnitude. Therefore, the ability to better understand and eventually control the turnover of C-F bonds is of particular interest to climate change and bioremediation.

The researchers used time-resolved X-ray crystallography to take molecular snapshots during the turnover reaction of this natural enzyme at physiological temperatures. This time-lapse movie revealed eighteen time points from 30 milliseconds to 30 seconds, covering all key catalytic states that lead to the breaking of the C-F bond. Surprisingly, the movie also shows that the enzyme ‘breathes’ during turnover, that is it expands and contracts aligned with the catalytic sub-steps.

Strikingly, the two halves of the enzyme communicate with each other via a string of water molecules that connects both halves. This water network allows the two halves to 'talk' to one another and share information about their catalytic state. This is crucial to the enzyme’s function as only one half of the enzyme can ever be active at a given time.

These dynamic changes have proven crucial to the enzyme’s function. The researchers expect many other systems to exploit similar mechanisms for their activities.