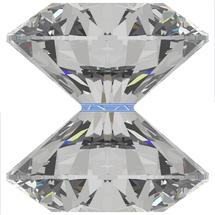 Experimental set-up: In a diamond anvil cell, liquid is confined to a few nanometres narrow gap (centre). In this environment, layers and crystallisation coexist, as the X-ray investigation has shown.

Very narrow gaps make liquids crystallise partially. X-ray investigations at DESY show that in gaps just a few molecule diameters wide both, liquid and crystal properties of a material can exist at the same time. The observation of this coexistence is important for all liquids in very small cavities and thus also for the study of friction (tribology). The team led by DESY researchers Milena Lippmann and Oliver Seeck presents the research in The Journal of Physical Chemistry Letters.

It was already known that liquids form atomically thin layers at an interface, such as the bottom or wall of a vessel. At the interface, the liquid is therefore not as disordered as in the volume. A relatively well-ordered layer of molecules of the liquid forms directly on the wall, on top of which a further layer is formed that is somewhat less orderly, on top of which a layer is even less orderly, until after about four to five layers the liquid is disordered.

“Despite this layering, the liquid remains liquid – the chemistry and physics of the layer do not change fundamentally,” explains Seeck. “An interesting situation arises if two smooth interfaces are brought together to a nanometre distance with a liquid between them.” One nanometre is one millionth of a millimetre. This brings the distance into the realm of molecule sizes. Depending on the specific liquid, its molecules can have a diameter of half a nanometre, for example.

In this case, theory expects the layering of the molecules to overlap on both sides and thus become stronger. “However, the predictions are divided as to whether the physical and chemical properties of the liquid will be retained or whether the restricted geometry will also lead to a change in the thermodynamic properties,” says Lippmann. “The latter can cause the liquid to crystallise – not because of pressure or temperature, but simply because it is thermodynamically more favourable in the narrow gap. This case would have a significant effect on all chemical and physical processes in the slit, since a crystal behaves very differently from a liquid.”

To answer this question, the team investigated liquid carbon tetrachloride (CCl4) as a model system between two diamond anvils that could be closed to a few nanometres narrow gap. With the bright X-rays from DESY's research light source PETRA III, the scientists could observe the molecular structure of the liquid at beamline P08. “We could show that in the diamond gap a coexistence of the liquid layers and crystals arises,” reports Lippmann. “The layering is not simply a result of the molecules being stacked on top of each other, but takes place on a submolecular level, since the CCl4 molecules have a preferred orientation. The resulting structure of alternating chlorine- and carbon-rich layers together with the preferred orientation forms a condensation nucleus for crystals.”

In this way, the material in the nanometre gap has both, the properties of a liquid and of a crystal. This can also be seen in the X-ray scattering images, which simultaneously show so-called Bragg reflections, a characteristic of crystals, as well as the scattering signal of liquid layers.

“Our observation has direct consequences for all types of liquids in very small cavities; this can be important for catalysis or other chemical reactions in nanometre gaps, for example, but also for investigating friction and correct lubrication,” emphasises Seeck. “The planned next generation of DESY's X-ray source, PETRA IV, will be able to investigate this process much more precisely, possibly also showing the dynamics.”