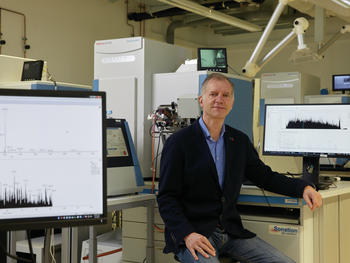 Matthias Mann (Germany), nominated for the European Inventor Award 2019 in the category Research

The European Patent Office (EPO) announces that German physicist, biochemist and bioinformatician Matthias Mann has been nominated for the European Inventor Award 2019 for developing techniques to screen proteins in bulk for the early detection of disease.

Named as one of three finalists in the "Research" category, Mann has been at the forefront of the field of proteomics for over two decades, heading two separate departments at research institutes in Germany and Denmark. His inventions have made it possible to not only identify, but also count and label every single protein contained in a tissue sample or bodily fluid such as blood. Analysing protein levels using Mann's techniques can reveal tell-tale signs of medical conditions, such as cancer and liver disease, even before patients fall ill. His techniques aim to help clinicians better predict, diagnose and treat illnesses.

"The ability to precisely measure the proteins at work inside cells offers unprecedented insight into how the human body works, how we fall ill and what kinds of treatment could work best," said EPO President António Campinos announcing the European Inventor Award 2019 finalists. "As a dynamic, rapidly-expanding industry, proteomics holds huge potential for improving human health. This potential has been unlocked through the pioneering work of Matthias Mann."

The winners of the 2019 edition of the EPO's annual innovation prize will be announced at a ceremony in Vienna on 20 June.

Turning to proteins for exact medicine

Proteins are the building blocks of living organisms. They carry out the orders of cells and reflect health threats in the body. While DNA is the blueprint for life, proteins are the tools that enable all functions in the body to work. A close study of the state and function of proteins can thus reveal previously undiscovered health threats; proteomics - a relatively new field of biology which studies the entire set of proteins of an organism or system – holds great potential for our understanding of disease. While the importance of proteins has long been recognised by scientists, capturing information about them from individual cells has posed a major challenge.

Cross-disciplinary scientist Matthias Mann became interested in finding solutions to this problem, drawing on his expert knowledge in different fields of research. After completing a Master's degree in Physics from the Univerity of Göttingen, Mann received his PhD in Chemical Engineering from Yale University in 1988. Studying under John Fenn, who received the 2002 Nobel Prize in chemistry, Mann specialised in mass spectrometry (a means of analysing proteins by sorting ions into a spectrum based upon their mass-to-charge ratio) and proteomics, and began exploring the precision that the analysis of vapourised proteins could unlock.

In 1994, Mann patented a new technique to extract proteins from human cells called nano-electrospray. This process vapourises the proteins after their extraction before charging them electrically. Using this technique, researchers can identify the mass, and hence the identity, of each vapourised protein by examining the extent to which it is deflected by an electric field.

Mann's nano-electrospray technique revolutionised the study of proteins, laying the groundwork for the field of proteomics as a discipline. It enabled mass spectrometry to screen proteins in bulk to reveal which proteins are contained in tissue samples or body fluids like blood. Sequencing thousands of proteins simultaneously has provided researchers with an unprecedented comprehensive view of how proteins function in cells. This work would guide his career from then on, and contributed to his mentor John Fenn winning the Nobel Prize.

The invention has raised the prospect of spotting early symptoms of diseases, such as the early onset of breast cancer or fatty liver disease, for example. This information could also help identify the cause of poorly understood diseases such as Parkinson's and diabetes by identifying "biomarkers" and find new treatments for them.

Applying the technology to diagnose diseases

Since returning to Europe in 1989, Mann has led research efforts to apply his invention to a clinical setting. In 2012, Mann described a further addition to the technique called SILAC (or ‘Stable Isotope Labelling by Amino Acids in Cell Culture') to label proteins in a machine-readable manner, replacing previous labour-intensive labelling methods. The technique involves replacing carbon atoms with a heavier isotope, in turn uniquely altering the mass of a protein. The diseased cells, on the other hand, contain only the naturally occurring, lighter carbon atoms. This means that all the proteins in the healthy cells are slightly heavier than those in the diseased cells. This change in mass appears as a 'tag', identifiable in mass spectromic measurements, which allows for the quick and automated mapping of the proteome (the complete set of proteins expressed by an organism). Overall this leads to improved diagnoses, more effective treatments and a better experience for the patient.

Labelling proteins by using the SILAC process allows medical specialists to track all the proteins produced by individual patients, creating a full ‘protein census' that can help spot differences between diseased and healthy cells faster and more accurately than ever before. "With the methods used so far, large-scale measurement of proteins was simply impossible," says Mann. "It would take years – and we need to be able to do it within hours or days!"

Mann's work spans a vast range of technical fields: not only has he developed preparation techniques for biological samples, and advanced labelling techniques for diseased cells, he and his team have also developed advanced software tools to analyse results.

The inventor says that in the long term, mass spectrometry and proteomics may help bring about the transition towards personalised treatments by identifying the unique combination of proteins at work inside each individual.

From the lab to the market

Today Mann is a global authority in the field of proteomics. He runs research groups at the Department of Proteomics and Signal Transduction of the Max Planck Institute of Biochemistry in Martinsried, Germany, and at the Novo Nordisk Foundation Centre for Protein Research within the University of Copenhagen, Denmark. He has authored over 700 peer-reviewed publications and is one of the most widely cited researchers in the world. Mann has also filed 36 patents worldwide. The inventor says that he always checks whether a breakthrough in the laboratory has been patented before publishing it in a scientific journal. When his initial search yields no results, he calls patent advisors provided by his institute to investigate prospects for commercialising the technology. "I am a believer in both open science and intellectual property, but  if you want your research to really help people, it is not enough just to publish it," says the inventor. "It has to be developed into a product that people can use – and for that you need patents."

In 2016, a start-up called PreOmics spun out of Mann's research group at the Max Planck Institute of Biochemistry to commercialise a sample preparation kit that simplifies mass spectrometry for researchers. In 2017, PreOmics had 12 employees and a turnover of EUR 550 000. With the personalised medicine market valued at an estimated EUR 170 billion over the next five years, Mann's work is likely to continue to find new uses in the future. While the technology he patented is currently used mostly in research contexts, there are an estimated 300 companies already active in the field of proteomics worldwide and counting.

He is involved with a large number of international projects and closely collaborates with partners in industry, including German drug company Evotec and Swedish biotech firm Atlas Antibodies.

This is a big motivation for the inventor.  Although he finds fundamental science important and stimulating, he enjoys the challenges and opportunities that arise as his invention moves towards clinical applications. "I can make more of an impact at the interface with industry and patients than only in describing the exact role of a new protein," Mann says.  As an example he points out that millions of people die of liver disease around the world every year. "They wouldn't have to die if we could diagnose it earlier. So here we can potentially make an impact on millions of people."