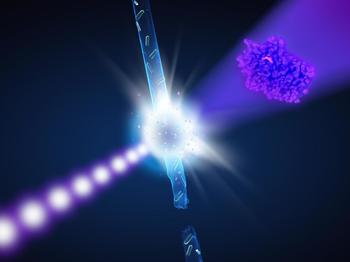 Artist's impression of the experiment: When the ultra-bright X-ray flashes (violet) hit the enzyme crystals in the water jet (blue), the recorded diffraction data allow to reconstruct the spatial structure of the enzyme (right).

An international collaboration led by DESY and consisting of over 120 researchers has announced the results of the first scientific experiments at Europe's new X-ray laser European XFEL. The pioneering work not only demonstrates that the new research facility can speed up experiments by more than an order of magnitude, it also reveals a previously unknown structure of an enzyme responsible for antibiotics resistance. “The groundbreaking work of the first team to use the European XFEL has paved the way for all users of the facility who greatly benefit from these pioneering experiments,” emphasises European XFEL managing director Robert Feidenhans'l. “We are very pleased - these results show that the facility works even better than we had expected and is ready to deliver new scientific breakthroughs.” The scientists present their results, including the first new protein structure solved at the European XFEL, in the journal Nature Communications.

“Being at a totally new class of facility we had to master many challenges that nobody had tackled before,” says DESY scientist Anton Barty from the Center for Free-Electron Laser Science (CFEL), who led the team of about 125 researchers involved in the first experiments that were open to the whole scientific community. “I compare it to the maiden flight of a novel aircraft: All calculations and assembly completed, everything says it will work, but not until you try it do you know whether it actually flies.”

The 3.4 kilometres long European XFEL is designed to deliver X-ray flashes every 0.000000220 seconds (220 nanoseconds). To unravel the three-dimensional structure of a biomolecule, such as an enzyme, the pulses are used to obtain flash X-ray exposures of tiny crystals grown from that biomolecule. Each exposure gives rise to a characteristic diffraction pattern on the detector. If enough such patterns are recorded from all sides of a crystal, the spatial structure of the biomolecule can be calculated. The structure of a biomolecule can reveal much about how it works.

However, every crystal can only be X-rayed once since it is vaporised by the intense flash (after it has produced a diffraction pattern). So, to build up the full three-dimensional structure of the biomolecule, a new crystal has to be delivered into the beam in time for the next flash, by spraying it across the path of the laser in a water jet. Nobody has tried to X-ray samples to atomic resolution at this fast rate before. The fastest pulse rate so far of any such X-ray laser has been 120 flashes per second, that is one flash every 0.008 seconds (or 8000000 nanoseconds). To probe biomolecules at full speed, not only the crystals must be replenished fast enough – the water jet is also vaporised by the X-rays and has to recover in time.

“We revved up the speed of the water jet carrying the samples to 100 metres per second, that's about as fast as the speed record in formula 1,” explains Max Wiedorn, who took care of the sample delivery together with his colleague Dominik Oberthür, both from CFEL. A specially designed nozzle made sure the high-speed jet would be stable and meet the requirements.

To record X-ray diffraction patterns at this fast rate, an international consortium led by DESY scientist Heinz Graafsma designed and built one of the world's fastest X-ray cameras, tailor-made for the European XFEL. The ‘Adaptive Gain Integrating Pixel Detector’ (AGIPD) can not only record images as fast as the X-ray pulses arrive, it can also tune the sensitivity of every pixel individually, making the most of the delicate diffraction patterns in which the information on the structure of the sample is encoded. “The requirements of the European XFEL are so unique that the detector had to be designed completely from scratch and tailored to this task,” reports Graafsma, who heads the detector group at DESY's photon science division and is also a professor at the Mid Sweden University. “This could only be achieved thanks to the comprehensive expertise and fruitful collaboration of the large team involved.”

The scientists first determined the structure of a very well-known sample, the enzyme lysozyme from egg-white, as a touchstone to verify the system worked as expected. Indeed, the structure derived at the European XFEL perfectly matches the known lysozyme structure, showing details as fine as 0.18 nanometres (millionths of a millimetre).

“This is an excellent proof of the X-ray laser's performance,” stresses XFEL pioneer Henry Chapman, a leading scientist at DESY and a professor at the University of Hamburg. “We are very excited about the speed of the analysis: Experiments that used to take hours can now be done in a few minutes, as we have shown. And the set-up that we used can even be further optimised, speeding up data acquisition even more. The European XFEL offers bright prospects for the exploration of the nanocosm.” The striking performance of the X-ray laser is also a particular success of the DESY accelerator division that led the construction of the world's longest and most advanced superconducting linear accelerator driving the European XFEL.

As their second target, the team chose a bacterial enzyme that plays an important role in antibiotics resistance. The molecule designated CTX-M-14 β-lactamase was isolated from the bacterium Klebsiella pneumoniae whose multidrug-resistant strains are a grave concern in hospitals worldwide. Two years ago, even a 'pandrug-resistant' strain of Klebsiella pneumoniae was identified in the U.S. according to the Centers for Disease Control and Prevention (CDC), unaffected by all 26 commonly available antibiotics.

The bacterium's enzyme CTX-M-14 β-lactamase is present in all strains. It works like a molecular pair of scissors cutting lactam rings of penicillin derived antibiotics open, thereby rendering them useless. To avoid this, antibiotics are often administered together with a compound called avibactam that blocks the molecular scissors of the enzyme. Unfortunately, mutations change the form of the scissors. “Some hospital strains of Klebsiella pneumoniae are already able to cleave even specifically developed third generation antibiotics,” explains Christian Betzel, co-author of the paper and also a professor at the University of Hamburg. “If we understand how this happens, it might help to design antibiotics that avoid this problem.”

The scientists investigated a complex of CTX-M-14 β-lactamase from the non-resistant, ‘wild type’ of the bacterium with avibactam bound to the enzyme's active centre, a structure that has not been analysed before. “The results show with 0.17 nanometres precision how avibactam fits snug into a sort of canyon on the enzyme's surface that marks its active centre,” says Markus Perbandt from the University of Hamburg, also a co-author of the paper. “This specific complex has never been seen before, although the structure of the two separate components were already known.”

The measurements show that it is possible to record high quality structural information, which is the first step towards recording snapshots of the biochemical reaction between enzymes and their substrates at different stages with the European XFEL. Together with the research groups of co-authors Martin Aepfelbacher and Holger Rohde, professors at the University Hospital UKE in Hamburg, the team plans to use the X-ray laser as a film camera to assemble those snapshots into movies of the molecular dynamics of avibactam and this β-lactamase. “Such movies would give us crucial insights into the biochemical process that could one day help us to design better inhibitors, reducing antibiotics resistance,” says Betzel.

Movies of chemical and biochemical reactions are just one example of a whole new spectrum of scientific experiments enabled by the European XFEL. A key factor is the speed at which data can be collected. “This opens up new avenues of structural discovery,“ stresses European XFEL scientist Adrian Mancuso who heads the SPB/SFX instrument (Single Particles, Clusters and Biomolecules & Serial Femtosecond Crystallography) where the pioneering experiments were done. “The difference in rate of discovery possible using European XFEL, demonstrated by this experiment, is as dramatic as the difference in travel time between being able to catch a plane across the Atlantic rather than taking a ship. The impact is potentially enormous.”

This first ‘beamtime’ for experiments at the European XFEL took place two weeks after the opening of the facility in September 2017, and was open to all scientists from the community to participate, contribute, learn, and gain experience in how to carry out such measurements at this facility. “The success of this ‘open science’ policy is illustrated by – among other things – the rapid dissemination of results from later campaigns at the SPB/SFX instrument by participating groups,” explains Chapman. “Additionally, the large concentration of effort by the community addressed previously unsolved challenges of managing and visualising data – crucial to conducting all serial crystallography experiments at the European XFEL.”

DESY's research director for Photon Science, Edgar Weckert, congratulates the whole team for their pioneering work: “These great achievements demonstrate the full potential of the superconducting high-repetition X-ray laser for high-throughput analyses that can fundamentally change research in this field.”