Zoom in to watch DNA code being read 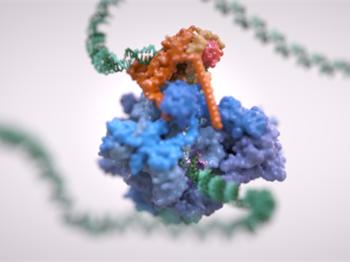 Scientists have unveiled incredible images of how the DNA code is read and interpreted - revealing new detail about one of the fundamental processes of life.

The mechanism for reading DNA and decoding it to build proteins for their needs is common to all animals and plants, and is often hijacked by cancer.

Researchers used an advanced form of electron microscopy called Cryo-EM, for which the Nobel Prize in Chemistry was awarded in 2017, to zoom in and capture images of the reading mechanism in unprecedented detail.

The discovery of exactly how the molecular mechanism works could open up new approaches to cancer treatment.

Scientists at The Institute of Cancer Research, London, captured images of molecular machinery called RNA Polymerase III in the act of transcribing a gene in exquisite and unprecedented detail.

The work was funded by the Biotechnology and Biological Sciences Research Council (BBSRC), Cancer Research UK and the Wellcome Trust.

RNA polymerase III is crucial to life for all eukaryotic cells - including all animals and plants. In cancer, it is more active, causing cells to produce larger numbers of the building blocks they need to grow and multiply.

Cryo-EM is so powerful that it can take pictures of tiny molecules - approximately 5 nanometers or 20000th of the width of a human hair - at almost an atomic level.

It allowed researchers to see for the first time how components of the RNA polymerase III complex and accessory molecules interact and communicate with each other, suggesting how drugs might be employed to split the complex up.

The new study captured the molecular machinery in the act of binding to DNA, separating the two strands and getting ready to transcribe the DNA code.

Cryo-EM involves freezing and imaging samples at -180°C to preserve minute details of protein shapes. This type of microscopy is also an emerging and exciting approach in cancer drug design.

Scientists at The Institute of Cancer Research (ICR) used the technique to reveal five key stages in which the complex reshapes itself to successfully transcribe the DNA code. Each of these stages could potentially become the target of new cancer drugs.

The researchers looked at the molecular mechanism in yeast cells, but the same machinery is used in humans.

The complex reads the DNA code and makes material known as transfer RNA - an essential part of producing the protein building blocks needed to allow cells to grow or to make new cells.

Cancer cells need large numbers of these protein building blocks as they rapidly grow and divide, so they can become particularly reliant on components of the RNA polymerase III complex.

Dr Alessandro Vannini, Team Leader in Structural Biology at The Institute of Cancer Research, London, said: "We used a really exciting new type of microscopy called Cryo-EM to do something no scientists have been able to do before. We were able to freeze and catch the RNA polymerase III complex in the act of attaching to, separating and reading the DNA code. We obtained almost a million of independent snapshots and, using powerful computers we grouped similar snapshots together, enhancing their detail to obtain a vivid reconstruction of this machinery at work."

"Now we know how the components of this crucial molecular mechanism fit together, we may be able to design drugs that turn the system on or off - and these could offer a whole new way of treating cancer."

The Institute of Cancer Research