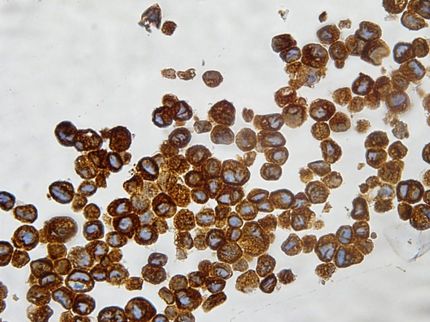 Breast cancer cell line stained with the method developed in the context of the FWF project. The intensity of the staining is a measure of the level of excessive GIRK1a production.

With the support of the Austrian Science Fund FWF, oncologists found a biomarker for breast cancer having a poor prognosis and developed two viable methods to detect it in tissue samples.

Breast cancer is the most frequent malignant tumour in women worldwide. In Austria, about 5,500 women develop it each year and 1,500 die of it despite the availability of an early detection programme. When a lump is found in a breast, the next step in clinical practice is a biopsy. Although no remedy exists for the anxious hours faced by the affected women, quick diagnostic procedures and competent information about the results are very helpful. The tissue sample taken is most important for diagnosis and treatment. If the tumour is found to be malignant, the subtype is determined immediately, since, depending on the result, different treatment methods are chosen. “After consultation by the interdisciplinary tumour board, the doctors discuss available treatment options with the patient and also talk about prognosis (chance to be cured), if the patient asks for it”, explains oncologist Thomas Bauernhofer from the University Hospital Graz.

In this context, the oncologist investigated a new biomarker in a project funded by the Austrian Science Fund FWF. This biomarker indicates a poorer prognosis for breast cancer patients. In a five-year research effort in close collaboration with the Institutes for  Biophysics and Pathology , the physician managed to produce evidence: a higher expression of the GIRK1 protein shows a greater relapse rate and mortality among patients with the hormone-dependent (ER+) breast cancer subtype after surgery.

Building block of an ion channel as a biomarker

The GIRK1 protein is one of at least two required elements for building functioning potassium ion channels in the cell membrane. Such ion channels are indispensable in the human heart, brain or pancreas and, for instance, ensure that the heart beats regularly. A scientific publication with a small number of cases that found GIRK1 in breast cancer inspired the research team to study this protein as a potential new biomarker. At first, a large quantity of messenger RNA (mRNA), a precursor in the production of the GIRK1 protein, was detected in breast cancer cell lines and tissue. By correlating tissue samples and genetic profiles of breast tumours with women’s survival statistics, it is now possible to identify patients at special risk. “Breast cancer patients with an estrogen-receptive positive tumour (ER+) usually respond well to anti-hormonal treatment. But in case the ER+ tumour express a great amount of GIRK1, such patients have a lower probability of survival”, explains Thomas Bauernhofer. The ER+ tumour subtype is found in about 60% of all breast cancer patients.

Within the FWF project, two methods were developed to detect excessive GIRK1 expression in tissue sections. The team spent many months looking for an appropriate staining method by means of immunohistochemistry. Having thus been established successfully, the new method is of benefit  for researchers investigating the GIRK ion channel in other contexts. The second detection method (fluorescence in-situ hybridisation) even enables scientists to determine the expression of GIRK1-mRNA in tumour tissue by means of automatic image analysis.

Which genes are working in parallel?

In a gene cluster examination, the team from Graz also proved that apart from the GIRK1 gene, three further genes are very active in a tumour. “Two genes are associated with an estrogen receptor (ER alpha), a third one with the angiotensin II receptor”, reports Thomas Bauernhofer. The higher mortality among women with an estrogen-receptor positive tumour and high GIRK1 expression could be attributed to a diminished effect of antihormonal therapy or an increased ability to form metastases. GIRK1, however, could also become a new target for treatment. Thomas Bauernhofer now wants to gain a more exact idea of the interdependencies: “It is still too early for verifying the biomarker in every biopsy. Our results do not have therapeutic consequences for the time being, but we need to further  investigate the relationship between GIRK1 and poor survival rates.”