Opening up a new chapter for early diagnosis of Alzheimer's 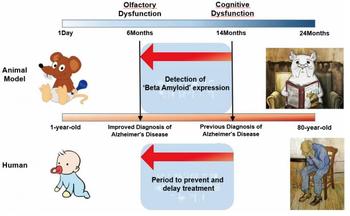 A model showing the progress of Alzheimer's disease and the importance of the early diagnosis through the comparison of the lifespan between animals and humans.

A research team led by DGIST Professor Moon Cheil at the Department of Brain and Cognitive Sciences has identified the reason why the patients with the early stage of Alzheimer's fail to smell.

The research team of Professor Moon Cheil conducted a joint research with the research teams led by Professor Suh Yoo-Hun and Chang Keun-A at Gachon Medical School and they have revealed the mechanism of the relationship between the initial progression of Alzheimer's and the olfactory dysfunction.

Alzheimer's disease (AD) is the most representative degenerative brain disease, accounting for 60 to 80% of all dementia cases. The greatest known risk factor is aging as the majority of people with Alzheimer's are 65 and older. In particular, Alzheimer's disease is becoming a serious social problem in Korea as the number of patients with degenerative brain disease increases as the country is entering an aging society at an unprecedented rate.

Currently, there is no underlying cure for dementia, but early detection of dementia may be able to ameliorate or delay the onset of symptoms. Some of the drugs available in the market are also focused on relief or delay of symptoms rather than direct treatment itself of dementia. Since those treatments are effective only when administered in a timely manner, it is important to diagnose Alzheimer's in the early stage.

In the initial stage of Alzheimer's disease, it is known that a toxic protein called 'beta- amyloid' is abnormally overexpressed and accumulates in the brain and adversely affect neuronal cells.

The sooner Alzheimer's is diagnosed, the greater the chance for perfect cure. Hence, there has been a worldwide effort underway to find inexpensive, but accurate way to detect early-stage AD. In particular, recent studies have reported the association between Alzheimer's and olfactory deterioration by suggesting that the initial symptoms of Alzheimer's can be simply checked in the olfactory test using peanut butter. However, the specific mechanism was not clearly revealed.

The AD brain has been histologically characterized by the presence of neuritic plaques - inflammatory lesion of nerves - and tangles of neuro-fibril, which are composed of protein aggregates of amyloid β (Aβ, beta-amyloid) and tau; the Aβ is known to be expressed only in the central nervous system. However, the research team also detected direct expression of Aβ in the olfactory epithelium, a peripheral nervous system, itself. Furthermore, it has also been proved that Aβ has a fatal effect on the olfactory nerve cell in olfactory epithelium and directly induces the failure of olfactory function.

Professor Mon Cheil said "We have discovered an important clue to predict the onset of Alzheimer's disease in the early stage by identifying the mechanism of beta-amyloid expression in the initial stage of Alzheimer's that was unknown until now. We will carry out the follow-up researches that can be used for the development of early detection of dementia, dementia treatment technology, and more."

This study has been published in the online edition of Cell Death & Disease.