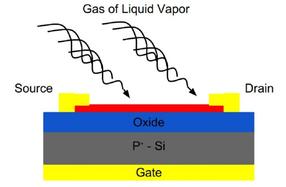 This is a schematic of the molybdenum disulfide (MoS2) thin-film sensor with the deposited molecules that create additional charge.

The relatively recent discovery of graphene, a two-dimensional layered material with unusual and attractive electronic, optical and thermal properties, led scientists to search for other atomically thin materials with unique properties.

Molybdenum disulfide (MoS2) has proved to be one of the most promising. Single-layer and few-layer molybdenum disulfide devices have been proposed for electronic, optoelectronic and energy applications. A team of researchers, led by engineers at the University of California, Riverside's Bourns College of Engineering, have developed another potential application: sensors.

"The sensors are everywhere now, including in smart phones and other portable electronic devices," said Alexander Balandin, UC Presidential Chair and professor of electrical and computer engineering at UC Riverside, who is the lead author of the paper. "The sensors we developed are small, thin, highly sensitive and selective, making them potentially ideal for many applications."

Balandin and the graduate students in his lab built the atomically thin gas and chemical vapor sensors from molybdenum disulfide and tested them in collaboration with researchers at the Rensselaer Polytechnic Institute in Troy, N.Y. The devices have two-dimensional channels, which are great for sensor applications because of the high surface-to-volume ratio and widely tunable concentration of electrons.

The findings were published in a recent paper, "Selective chemical vapor sensing with few-layer MoS2 thin-film transistors: Comparison with graphene devices," in the journal Applied Physics Letters. In addition to Balandin, co-authors were Rameez Samnakay and Chenglong Jiang, both Ph.D. students in Balandin's lab, and Michael Shur and Sergey Rumyantsev, both of Rensselaer Polytechnic Institute.

The selective detection did not require prior functionalization of the surface to specific vapors. The tests were conducted with the as fabricated devices and intentionally aged devices. The molybdenum disulfide sensors used in the study were aged for two months because practical applications require that sensors remain stable and operational for at least a month.

Sensors made with atomically thin layers of MoS2 revealed better selectivity to certain gases owing to the electron energy band gap in this material, which resulted in strong suppression of electrical current upon exposure to some of the gases. Graphene devices, from the other side, demonstrated selectivity when one used current fluctuations as a sensing parameter.

The uniqueness of the UC Riverside built atomically thin gas sensors - both graphene and MoS2 - is in the use of the low-frequency current fluctuations as additional sensing signal. Conventionally such chemical sensors use only the change in the electrical current through the device or a change in the resistance of the device active channel.