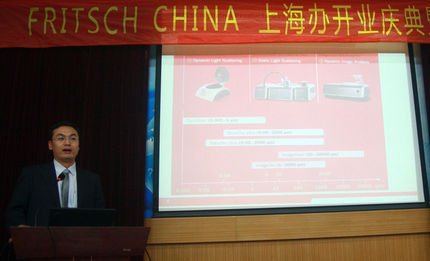 And FRITSCH Milling and Sizing steadily progresses forward: besides the subsidiary in the Chinese capital Beijing, now an office was opened in Shanghai.

Since decades FRITSCH is involved in international markets and of course also in the Chinese market. In order to serve the growing customer base in a continuative, flexible, and customer oriented manner a subsidiary was founded directly in Shanghai. Two markets at once will be managed from Shanghai: The South Chinese market as well as Hong Kong which is only 120 km away.

On October 16th, 2013, barely a year after the opening of the subsidiary in Beijing, the official opening ceremony for the office in Shanghai was held. FRITSCH employees Li Xiao, Diels Ding and Sala Bian welcomed customers from economy, research as well as employees and FRITSCH partners.

At the beginning of the opening ceremony Mr. Sala Bian introduced important guests and FRITSCH customers and declared the FRITSCH subsidiary in Shanghai as officially opened. Afterwards, employees of the University of Shanghai lectured about the diverse FRITSCH products which are utilized regularly in everyday research work.

Then Mr. Li Xiao introduced new FRITSCH products, like for example the Particle Sizing Instruments ANALYSETTE 28 and the new generation of the FRITSCH premium line mills.  Mr. Diels Ding then elaborated on the application oriented spectrum of the diverse FRITSCH laboratory instruments. A question and answer session ended the official part of the celebration.

And the additional expansion of the presence in China is also already planned:  the medium-term plans include that 1 – 2 additional FRITSCH offices will be created in China.