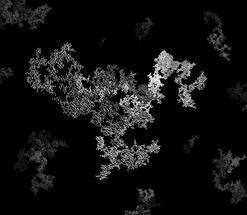 For the first time, air-polluting soot particles have been imaged in flight down to nanometre resolution. Pioneering a new technique, the international team, including researchers from DESY, snapped the most detailed images yet of airborne aerosols. “For the first time we can actually see the structure of individual aerosol particles floating in air, their 'native habitat',” said DESY scientist Henry Chapman from the Center for Free-Electron Laser Science (CFEL) in Hamburg. “This will have important implications for various fields from climate modelling to human health.” CFEL is a joint venture of Deutsches Elektronen-Synchrotron DESY, the German Max Planck Society and the University of Hamburg.

Aerosol particles like soot play important roles in a wide range of fields from toxicology to climate science. Despite their importance, their properties are surprisingly difficult to measure: Visible light doesn't provide the necessary resolution, X-ray sources are usually not bright enough to image single particles, and for electron microscopy particles have to be collected onto a substrate, which potentially alters their structure and encourages agglomeration.

Using the world´s most powerful X-ray laser LCLS at the U.S. SLAC National Accelerator Laboratory in Stanford (California), the team captured images of single soot particles floating through the laser beam. “We now have a richer imaging tool to explore the connections between their toxicity and internal structure,” said SLAC's Duane Loh, lead author of the study appearing in this week´s scientific journal “Nature”. Free-electron lasers like LCLS or the European XFEL currently being built in Hamburg consist of particle accelerators that send unbound (free) electrons on a tight slalom course where they emit X-ray light.

The study focused on particles less than 2.5 micrometres in diameter. This is the size range of particles that efficiently transport into the human lungs and constitute the second most important contribution to global warming. Microscopic soot particles were generated with electric sparks from a graphite block and fed with a carrier gas of argon and nitrogen into a device called an aerodynamic lens, that produces a thin beam of air with entrained soot particles. This aerosol beam intercepted the pulsed laser beam. Whenever an X-ray laser pulse hit a soot particle, it produced a characteristic diffraction pattern that was recorded by a detector. From this pattern, the scientists were able to reconstruct the soot particle´s structure.

“The structure of soot determines how it scatters light, which is an important part of understanding how the energy of the sun is absorbed by the earth's atmosphere. This is a key factor in models of the earth's climate,” explained co-author Andrew Martin from DESY. “There also are many links between airborne particles around two micrometres in size and adverse health effects. Using the free-electron laser we are now able to measure the shape and composition of individual airborne particles. This may lead to a better understanding of how these particles interfere with the function of cells in the lungs.”

The team recorded patterns from 174 individual soot particles and measured their compactness, using a property called fractal dimension. “We've seen that the fractal dimension is higher than what was thought,” said Chapman. “This means that soot in the air is compact, which has implications for the modelling of climate effects.” Also, the structure of the airborne soot seems to be surprisingly variable. “There is quite some variation in the fractal dimension, which implies that a lot of rearrangement is going on in the air,” explains Chapman.

A primary long-term goal of the research is to take snapshots of airborne particles as they change their size, shape and chemical make-up in response to their environment, explained Michael Bogan from SLAC, who led the research. “Scientists can now imagine being able to watch the evolution of soot formation in combustion engines from their molecular building blocks, or maybe even view the first steps of ice crystal formation in clouds.”

In real-world settings soot is seldom pure. To see the effects of mixing with other aerosols, the researchers added salt spray to the soot particles, resulting in larger particles with soot attached to the tiny salt crystals. Such composite particles might form in coastal cities and are expected to have a much larger climate effect than soot alone. Composite aerosols are more difficult to analyse, but the new technique could clearly discern between soot, salt and mixtures of both. As the aerosol particles are vaporized by the intense X-ray laser pulse, the researchers could use mass spectroscopy to examine the composition of each individual particle imaged.

Even though the aerosol particles are destroyed by the X-ray laser pulse, the pulse is so short that it out-runs this destruction. Therefore the diffraction patterns are of high quality and represent the undamaged object. The novel X-ray technique can find wide application to study all sorts of aerosols and can also be extended to resolve the static and dynamic morphology of general ensembles of disordered particles, the researchers state.

“We are now able to study the structure of soot by measuring individual particles in a large ensemble,” explains Martin. “Biological samples, like cells and large proteins, have a similar size to the soot particles we studied and also lack a fixed, reproducible structure. In the future it may be possible to extend these techniques beyond aerosols, to study the structural variations in biological systems.”