Revealing the Genome of the Common Ancestor of All Mammals 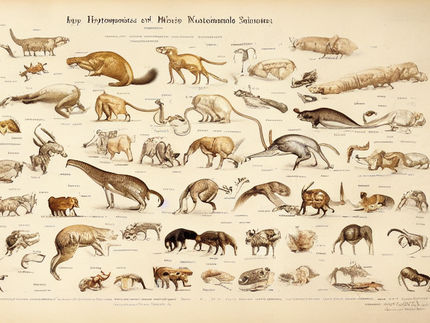 An international team has reconstructed the genome organization of the earliest common ancestor of all mammals. The reconstructed ancestral genome could help in understanding the evolution of mammals and in conservation of modern animals. The earliest mammal ancestor likely looked like the fossil animal “Morganucodon” which lived about 200 million years ago. The work is published the scientific journal “Proceedings of the National Academy of Sciences”.

Every modern mammal, from a platypus to a blue whale, is descended from a common ancestor that lived about 180 million years ago. We don’t know a great deal about this animal, but the organization of its genome has now been computationally reconstructed by an international team of scientists.
“Our results have important implications for understanding the evolution of mammals and for conservation efforts,” says Harris Lewin, distinguished professor of evolution and ecology at the University of California, Davis, and senior author on the paper.

The scientists drew on high-quality genome sequences from 32 living species representing 23 of the 26 known orders of mammals. They included humans and chimps, wombats and rabbits, manatees, domestic cattle, rhinos, bats and pangolins. The analysis also included the chicken and Chinese alligator genomes as comparison groups. Some of these genomes are being produced as part of the Earth BioGenome Project and other large-scale biodiversity genome sequencing efforts. Lewin chairs the Working Group for the Earth BioGenome Project.

The reconstruction shows that the mammal ancestor had 19 autosomal chromosomes, which control the inheritance of an organism’s characteristics outside of those controlled by sex-linked chromosomes, (these are paired in most cells, making 38 in total) plus two sex chromosomes, said Joana Damas, first author on the study and a postdoctoral scientist at the UC Davis Genome Center. The team identified 1,215 blocks of genes that consistently occur on the same chromosome in the same order across all 32 genomes. These building blocks of all mammal genomes contain genes that are critical to developing a normal embryo.

The scientists found nine whole chromosomes, or chromosome fragments in the mammal ancestor whose order of genes is the same in modern birds’ chromosomes.

“This remarkable finding shows the evolutionary stability of the order and orientation of genes on chromosomes over an extended evolutionary timeframe of more than 320 million years,” Lewin says. In contrast, regions between these conserved blocks contained more repetitive sequences and were more prone to breakages, rearrangements and sequence duplications, which are major drivers of genome evolution.
“Ancestral genome reconstructions are critical to interpreting where and why selective pressures vary across genomes. This study establishes a clear relationship between chromatin architecture, gene regulation and linkage conservation,” says Professor William Murphy, Texas A&M University, who was not an author on the paper. “This provides the foundation for assessing the role of natural selection in chromosome evolution across the mammalian tree of life.”

The scientists were able to follow the ancestral chromosomes forward in time from the common ancestor. They found that the rate of chromosome rearrangement differed between mammal lineages. For example, in the ruminant lineage (leading to modern cattle, sheep and deer) there was an acceleration in rearrangement 66 million years ago, when an asteroid impact killed off the dinosaurs and led to the rise of mammals.

“The results will help understanding the genetics behind adaptations that have allowed mammals to flourish on a changing planet over the last 180 million years,” explains co-author Dr Camilla Mazzoni, head of “Evolutionary and conservation genetics” at Berlin Center for Genomics in Biodiversity Research and Research Group Leader in Evolutionary and Conservation Genomics at the Department of Evolutionary Genetics at Leibniz-IZW.