The electron slow motion: How do different materials react to the impact of ions? 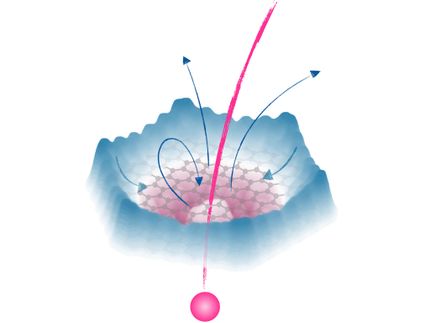 While penetrating through a thin material layer, highly charged ions emit many electrons which are influenced by the distribution of the remaining electrons in the material.

When ions penetrate a material, highly complex processes take place - so fast that they could hardly be analyzed until now. But sophisticated measurements have now made it possible.

How do different materials react to the impact of ions? This is a question that plays an important role in many areas of research - for example in nuclear fusion research, when the walls of the fusion reactor are bombarded by high-energy ions, but also in semiconductor technology, when semiconductors are bombarded with ion beams to produce tiny structures.

The result of an ion impact on a material is easy to study retrospectively. However, it is difficult to understand the temporal sequence of such processes. A research group at TU Wien has now succeeded in analyzing on a time scale of one femtosecond what happens to the individual particles involved when an ion penetrates materials such as graphene or molybdenum disulphide. A careful analysis of the electrons that are emitted in the process was crucial: They can be used to reconstruct the temporal sequence of the processes - in a way, the measurement becomes an "electron slow-motion". The results have now been published in "Physical Review Letters" and were even selected as an "Editors' Suggestion".

Prof. Richard Wilhelm's research group at the Institute of Applied Physics at TU Wien works with highly charged ions. Xenon atoms, which have 54 electrons in their neutral state, are stripped of 20 to 40 electrons, and the strongly positively charged xenon ions that remain are then directed onto a thin layer of material.

"We are particularly interested in the interaction of these ions with the material graphene, which consists of only a single layer of carbon atoms," says Anna Niggas, first author of the current paper. "This is because we already knew from previous experiments that graphene has very interesting properties. Electron transport in graphene is extremely fast."

The particles react so quickly that it is not possible to observe the processes directly. But there are special tricks that can be used: "During such processes, a large number of electrons is usually released as well," Anna Niggas explains. "We were able to measure the number and energy of these electrons very precisely, compare the results with theoretical calculations contributed by our co-authors from Kiel University, and this allowed us to unravel what happens on a femtosecond scale."

The ion needs only about one femtosecond to penetrate a graphene layer. Processes on such short time scales could previously be measured with ultrashort laser pulses - but in this case they would Deposit a lot of energy in the material and completely change the process. "With our method, we have found an approach that allows quite fundamental new insights," says Richard Wilhelm, head of an FWF START project at TU Wien. "The results help us to understand how matter reacts to very short and very intense radiation exposure - not only to ions, but ultimately also to electrons or light."