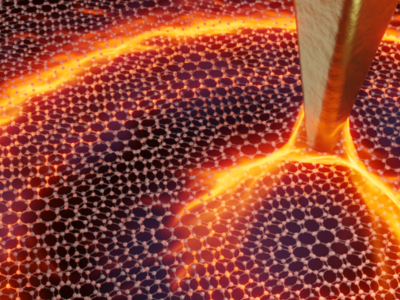 When two layers of graphene are placed one on top of the other, and twisted among them by a very small angle, a “moiré pattern” is formed and the physical properties of the system have proven to change dramatically. In particular, near the ‘magic’ angle of 1 degree, the electrons slow down dramatically, favoring interactions between the electrons. Such interactions give rise to a new type of superconductivity and insulating phases in twisted bilayer graphene. Along with many other fascinating properties discovered in the past three years, this material has proven to display extremely rich physical phenomena, but most importantly, it has shown to be an easily controllable quantum material. Now, even though this carbon made material has exhibited this amazingly diverse states, the interaction between twisted bilayer graphene and light was shown to have fascinating outcomes on a theoretically level, but no experiment has so far been able to clearly show how this interaction works.

In a recent work published in Nature Physics, ICFO researchers Niels Hesp, Iacopo Torre, David Barcons-Ruiz and Hanan Herzig Sheinfux, let by ICREA Prof. at ICFO Frank Koppens, in collaboration with the research groups of Prof. Pablo Jarillo-Herrero (MIT), Prof. Marco Polini (University of Pisa), Prof. Efthimios Kaxiras (Harvard), Prof. Dmitri Efetov (ICFO) and NIMS (Japan), have found that twisted bilayer graphene can be used to guide and control light at the nanometer scale. This is possible thanks to the interaction between light and the collective movement of the electrons in the material.

By exploiting the properties of plasmons, in which electrons and light move together as one coherent wave, the scientists were able to observe that plasmons propagate in the material, while being strongly confined to the material, down to the nanoscale.  Moreover, by observing the unusual collective optical phenomena occurring in the material, they were able to understand the type peculiar properties of the electrons. This observation of propagating light, confined to the nanoscale, can be used as a platform for optical sensing of gases and bio-molecules.

To obtain the results of this discovery, the team used a near-field microscope, which allows probing the optical properties with a spatial resolution of 20 nanometers, a resolution that goes beyond the diffraction limit. In brief, the scientists took a two layers of graphene, put them one on top of the other, while twisting them close to the magic angle and then, at room temperature, illuminated the material with infrared light on a nano-sized spot. They saw that the plasmons behaved very differently from the usual plasmons, for example in metals or graphene, and this deviation is linked to peculiar motion of the electrons within the moiré superlattice of the bilayer graphene.

ICFO – The Institute of Photonic Sciences