Alarm Before There Is Even a Fire 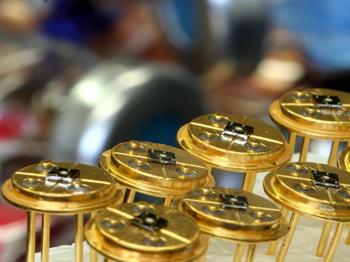 INNOspace Masters is an annual ideas competition that showcases new ideas for space and earth applications. A team from ZARM and IWT at the University of Bremen, in collaboration with the Institute for Physical and Theoretical Chemistry at the University of Tübingen, has now won the DLR Design Challenge with a highly interesting project: a smoke detector that can “sniff out” causes of fire even before it breaks out.

In the INNOspace Masters competition, a total of five challenges are set by various organizations and companies – the one from DLR (German Aerospace Center) has now been won by the Bremen team, consisting of Christian Eigenbrod and Florian Meyer from the Center of Applied Space Technology and Microgravity (ZARM), Professor Lutz Mädler from the Institut für Werkstofftechnik [Institute for Material Science] (IWT) at the University of Bremen, and Dr. Nicolae Bársan from the Institute for Physical and Theoretical Chemistry at the University of Tübingen. They have now been awarded a prize for their work at the award ceremony in Berlin. The victory also means financial support for the project. “A total of 153 proposals were received,” says Christian Eigenbrod. “That’s why the fact that we came in first place in this competition makes us so proud.”

Alarm Before There Is Even a Fire

The project involves the development of fire detection sensors that can “sniff out” the cause of a fire before it breaks out. “For example, everyone knows the smell of overheated electrics or electronics. In a very similar way, any material, when overheated, emits gaseous substances that can be detected by novel semiconducting metal-oxide layers,” explains Christian Eigenbrod.

What the semiconductors detect in the process, and what is critical and what is noncritical, must be taught to them through machine-learning routines. The layers change their resistance not only due to specific ingredients in the air, but also due to the general change in atmospheric composition. Not only additionally emitted substances play a role, but also what is less present instead. After appropriate training, there is hardly a gaseous substance that cannot be detected in this way.

There is no concrete technical design yet. Sensors of this type are marketed by the company Sensirion AG – a spin-off of ETH Zurich – and are used, among other things, in devices for monitoring quality the quality of air indoors. This involves, for example, CO2, CO, or formaldehyde, which can outgas from furniture. However, own sensors can also be manufactured at IWT and specially adapted to the requirements for fire detection.

The idea for such a smoke detector arose a few years ago through an ESA (European Space Agency) MAP (Microgravity Application Promotion) project together with the University of Tübingen and ETH Zurich to try and produce novel sensors under microgravitational conditions. During the manufacturing process, the layers are deposited from a very hot spray flame onto a substrate. In the process, the flame provides the necessary high temperatures. The liquid, which is added to the flame in the form of a flammable spray, contains the base materials for the semiconductor layer.

The standard process is called Flame Spray Pyrolysis (FSP). It turned out that the necessary high temperatures could only be achieved by means of oxyhydrogen flames (hydrogen and oxygen). Since these flames have a very fast propagation speed, they are highly turbulent and the gravitational influence is extremely small. As far as this was concerned, this project was not a success in the sense of being able to produce new materials in zero gravity.

Christian Eigenbrod had recalled these very sensor layers when current research into fire safety in astronautical space travel showed that currently used smoke detectors were hardly up to carrying out their task. In principle, they can only do this very poorly under the conditions on the International Space Station (ISS), since all other types of fine particles are detected in addition to smoke, which leads to frequent false alarms. It also became clear that classic smoke detectors on a lunar space station have little chance of functioning reliably in the constant presence of ultrafine regolith dust. Smoke detectors also generally only sound an alarm when it is, in principle, already too late.

So the contact with Tübingen was reignited and inquiries were made as to whether the semiconductor sensors might be able to detect outgassing originating from overheated plastics, perhaps even before they ignite. This question was received a resounding yes, and the idea of a new type of fire detector was born.

Due to the success at the INNOspace Masters, the implementation of the idea is now being investigated by means of a development project, for which funding of up to €400,000 will be made available. After a successful first phase of the project, it would be possible that an initial prototype of the system could be developed, which could then be tested on the ISS, for example.