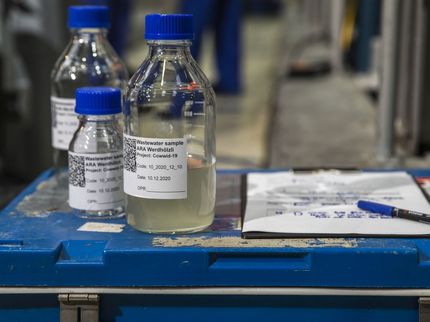 The R number of coronavirus can be estimated from wastewater.

Since the start of the coronavirus (Sars-Cov-2) pandemic, many public health measures have been decided based on its dynamic of spread, more precisely, on the reproductive number of the virus, known as the R number. This value indicates how many people on average are infected by a person carrying the virus. It reflects the transmission dynamics of the disease.

Currently, the reproductive number of the virus is estimated from available clinical data, such as the numbers of positive cases, of hospitalisations or of deaths. Now, for the first time, a team of researchers funded by the Swiss National Science Foundation (SNSF) has shown that it is also possible to reliably estimate the reproductive number of the virus by monitoring its presence in wastewater. The study is published on the preprint server medRxiv and has not yet been peer-reviewed.

Determining the number of infected people

Those infected with the virus excrete it into the sewage system, for example when brushing their teeth or going to the toilet. Depending on how many people are infected at any given time, trace levels of the virus in the wastewater will vary. “We determine the viral load of the wastewater by performing a test similar to the PCR tests we do on people. Basically, we are checking for the presence of the genetic material of the virus in wastewater samples,” says Jana Huisman, postdoc at ETH Zurich and first author of the study.

The next step is to go from the viral load to the reproductive number of the virus. This is where a mathematical model developed by the research team comes into play. “The measurements of viral load in the wastewater enable us to estimate how many people are infected by the virus and to follow the dynamics over time,” says Huisman. That makes it possible to estimate the viral reproductive number.

The technique has been tested in Zurich and the USA and has proven effective - the R numbers are comparable to those estimated with clinical data - provided the wastewater is analysed at least three times per week. According to the researchers, this rhythm is optimal in terms of accuracy and cost.

Monitoring Sars-CoV-2 in wastewater is not new. But thanks to the technique developed by the researchers, it is now possible to quickly and affordably translate these measurements into a value that is of direct practical use to epidemiologists. “Moreover, it is independent of clinical data,” says Huisman. This is an important point, as clinical data can be biased. For example, criteria for testing may change, falsely varying the number of positive cases detected. Similarly, hospital admission criteria or the definition of Covid-19-related deaths may change.

Another advantage is that the researchers’ technique enables continued surveillance of coronavirus in locations where clinical testing is limited. It could also be used to monitor other pathogens for which clinical data are unavailable, for example other human coronaviruses, enterovirus, norovirus and rotavirus or even influenza.