Microlab on a chip: Water please, but clean 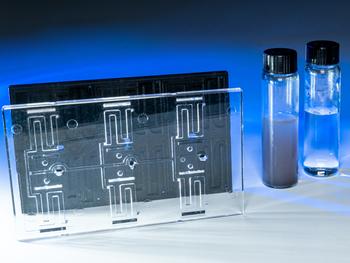 With the microfluidic lab- on-a-chip developed in the MICROCHIP project, samples can be analyzed fully automatically from just a few drops in a short time.

A microfluidic chip takes up a water sample, adds the necessary chemicals and transports it to the detection site. What's the point? In this way, the water is to be analyzed fully automatically and with various parameters, and at the lowest possible cost. A further developed chip prototype for water analysis devices has emerged from the MICROCHIP project.

Whether in the waterworks, laboratory, in a swimming pool or from the tap - who would not like to have a quick and easy water analysis at hand. With the microfluidic lab-on-a-chip developed in the MICROCHIP project, samples can be analyzed fully automatically from just a few drops in a short time. Thus enabling personnel without training to detect six parameters relevant to water analysis in parallel with a low-cost measuring device additionally saves time and costs. Furthermore, user errors are eliminated with this methodology. Reagents cannot be mixed up and the amount of water suitable for the method is set by the chip.

Mirror instead of transparancy

The chip achieves high measurement accuracy. Among other things, this is possible due to an extended path length and an adapted design that keep the chip compact. Instead of an originally planned transmission solution, the project partners opted for a so-called mirror solution. The re-design of the hardware with different colored LEDs ultimately enables analytics for the photometry-based measurement method, in which colored water samples are evaluated.

The chip ultimately reaches about the size of a credit card, combined with a lot of technology such as an electronic board with photometric sensors, ultrasonic mixers, pressure reservoirs as well as a peristaltic pump insertion for the chip along with a pressure mechanism that had to be accommodated in the small housing. Compared to previous solutions, this one is much more cost-effective. The project partners show that it is possible to perform multi-parameter water analyses in a polymer chip. They do not use complex and expensive technologies such as blister and freeze-drying. Instead, they dry the reagents directly in chambers in the chip. A simple peristaltic pump is used to direct the measuring liquid through the chip. As a result, the sensors measure the liquid colored by the reagents in the same measuring chamber as the previously colorless reference sample. The chip is manufactured by injection molding. To ensure that the chip is also pressure-tight to the outside, the channels in a black top shell and a transparent bottom shell are welded together using a laser beam process.

Previous comparable systems for automated water analysis after adding the water sample in polymer chips are either too bulky or they analyze fewer parameters in parallel. The demonstrator developed and implemented in the consortium is not yet ready for mass production. However, the results of the development and tests are already being used by one of the project partners, Water-i.d. GmbH, in the production of further water analysis devices and reagents.