Pathogen-specific detection: Even one single DNA molecule is enough 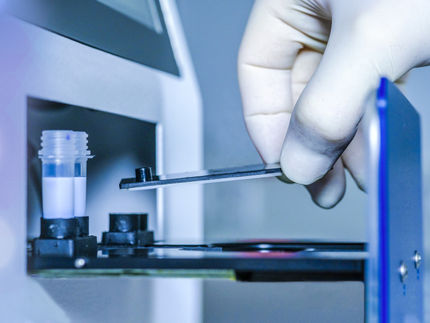 The compact device for detecting multidrug-resistant pathogens performs all stages of the reaction automatically and provides a result within one hour. Even one single DNA molecule is enough for detection.

Resistance to antibiotics is on the rise worldwide. Researchers at the Fraunhofer Institute for Physical Measurement Techniques IPM alongside the Ludwig Maximilian University of Munich have developed a process for rapidly detecting multidrug-resistant pathogens. The unique feature: Even one single molecule of DNA is sufficient for pathogen detection. In future, the platform could be introduced as part of point-of-care diagnostics on hospital wards or in medical practices as an alternative to the established PCR analyses or in combination with other diagnostic methods.

Choosing the correct antibiotic to treat bacterial infections is a deciding factor when it comes to the success of a treatment. It is particularly difficult to select suitable medication in cases where a disease is caused by multidrug-resistant pathogens, which are unaffected by many antibiotics. Searching for the most effective antibiotic often requires information about the bacteria’s genome. Most of the time, this information is not readily available at medical practices and can only be obtained through a laboratory diagnosis. To accelerate and simplify the process, Fraunhofer IPM has collaborated with the Ludwig Maximilian University of Munich to develop a new platform for detecting pathogens on the basis of single molecules on a microfluidic chip. The focus of the SiBoF (signal boosters for fluorescence assays in molecular diagnostics) project lies on an easy-to-use point-of-care (POC) detection method. The project is funded by the German Federal Ministry of Education and Research (BMBF).

Pathogen-specific detection based on DNA molecules

The portable, compact test platform is equipped with an automated fluidic system. All necessary reagents are stored within the system. The injection-molded microfluidic chip is incorporated in a drawer in the test system, where it is supplied with the reagents through the fluidics system before the optical analysis takes place. “We detect part of the pathogen’s DNA strand. Using our new process, even a single molecule of DNA that binds to a specific site on the microfluidic chip is sufficient to do this. Fluidic channels are integrated into the chip – the surfaces of which are primed with binding sites for specific pathogens,” explains Dr. Benedikt Hauer, scientist at Fraunhofer IPM.

Typically, target DNA molecules are detected by means of specific fluorescence markers. A unique feature of the new method designed by Fraunhofer IPM and the Ludwig Maximilian University of Munich is that researchers are utilizing antennas with nanometer-sized beads, which amplify the optical signals of these markers. Because of this, chemical amplification via polymerase chain reaction (PCR) is not required. “The optical antennas consist of nanometer-sized metal particles that concentrate light in a tiny region and also help to emit the light – much as macroscopic antennas do with radio waves,” says Hauer, the project manager of this research project at Fraunhofer IPM. These metal particles are chemically bound to the surface of the chip.

Results available after one hour

A structure of DNA molecules, known as “DNA origami”, which was specifically designed by the Ludwig Maximilian University of Munich, holds both of the gold nanoparticles in place. Between these nanoparticles, the structure provides a binding site for the respective target molecule and a fluorescence marker. This patented design provides the basis for the novel assay technology. “The particles, which are 100 nanometers in size, serve as antennas. Field enhancement, caused by plasmonic effects, takes place in the hotspot between the two gold particles. If a fluorescent dye is placed there, the detectable long-wave fluorescence radiation is enhanced multiple times. Using this method, a single molecule can be detected using a small, compact optical device,” explains the researcher. Low concentrations of pathogens can be detected. The result is available after one hour and is displayed on the monitor. This is not only true for multidrug-resistant pathogens, but also for any type of DNA molecule. In principle, the single molecule assay can be adapted to molecules beyond DNA, such as RNA, antibodies, antigens or enzymes. Numerous tests have successfully confirmed the functionality of the process.

At the heart of the POC device is a miniaturized high-resolution fluorescence microscope, developed by Fraunhofer IPM. Specifically developed image analysis software identifies single molecules and by doing so enables the captured target molecules to be counted, providing a quantitative result. The fluorescence is stimulated using LEDs, which are affixed underneath the cartridge containing the fluidic channels.

The patented system is available for the purpose of demonstration. Currently, a module for sample preparation is still missing.