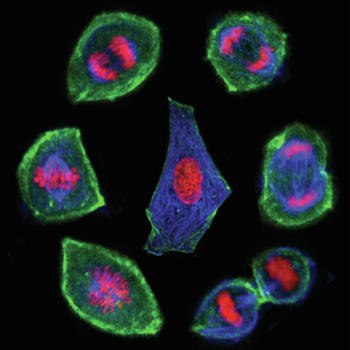 Lifecycle of a biological cell: cell (in centre) before mitosis (cell division) takes place. From bottom left and then clockwise: the cells become rounder and the shell thickens as the insides of the cell change - soften and fluidify. The genetic material is shared out to create two new daughter cells. (Image taken with a confocal microscope, research carried out using optical tweezers)

Living cells are the basic building blocks of all organisms. We, as humans, are essentially a collection of trillions of living cells: and all these cells emerge from a single fertilized egg. This means that “mitosis” (or cell division) is one of the most fundamental and important processes of life. It is known that cells change drastically in shape and mechanical properties when they divide. For instance, the protein layer beneath the outer membrane stiffens and ‘rounds up’ becoming more spherical. However, up to now, little was known about what goes on inside the cell during mitosis. In this study, researchers used optical tweezers to reveal that inside the cell it softens and fluidifies (becomes more fluid), while also becoming less active during cell division. The results of this study were published in Nature Physics.

The mechanical properties of the inside of the cell have a great impact on its processes during mitosis, e.g. on the distribution of cellular components or the segregation of the genetic material. However, it is difficult to probe inside a living cell to find out what is going on without damaging it. Using optical tweezers, however, researchers could literally ‘feel’ inside a cell without touching or harming it. This contact-free manipulation tool consists of highly focused infrared lasers, which can trap and oscillate intracellular particles, allowing researchers to take detailed, microscopic measurements in real time.

Professor Timo Betz University of Göttingen, explains, “Optical tweezers enable us to study the mechanics of the cell in a similar way to how we might test the softness of a tomato at the local market, by simply squeezing it and feeling how much it squashes.”  In this way, scientists could quantify and monitor the characteristic properties of the environment inside the cell throughout the process of mitosis. At this time, metabolic processes use chemical energy to transport components within the cell. So, in addition to investigating mechanical properties like stiffness, the researchers were also able to measure the cell’s contribution to the energy exerted on these components.

The experiments revealed that during mitosis, biological cells soften their interior, become more fluid inside, and activity within the cell is reduced, while the shell stiffens and rounds. The softening and fluidifying can potentially help to ensure the precise and fair separation inside the cells of specialised structures – known as organelles – into the two resulting daughter cells. “It is crucial for the organism that everything goes to plan during cell division. Understanding this process is important because even slight deviations can lead to cell death or mutations that encourage the formation of cancerous cells or could affect the organism’s health or ability to reproduce,” adds Betz. “We speculate that the stiffening of the cell’s surface protects the cell’s now mechanically weakened insides. Furthermore, the observed softening suggests a physiological role for the changes. For instance, it may greatly facilitate any transport process during the separation of the two daughter cells.”